MAP05: Arena is the fifth map of SlayeR. It was designed by Richard Wiles and uses the music track " ". 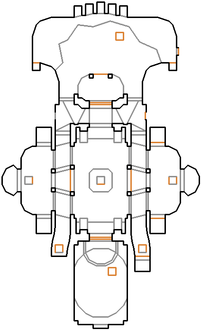 Map of Arena
Letters in italics refer to marked spots on the map. Sector numbers in boldface are secrets which count toward the end-of-level tally.

In the central arena, two sides of the red door, the sides that have the red skulls on them, actually require the yellow key to open. Both linedefs (543 and 550) have action 34 (D1 Door (Yellow) Open Stay), meaning that if the player cheats to get the yellow key (since there is no yellow key present in the level) and opens the door on either of these linedefs, it will stay open.

* The vertex count without the effect of node building is 462.