MAP05: Autumn in Hell is the fifth map of Congestion 1024. It was designed by Rachel Schmitz (Negatronica). 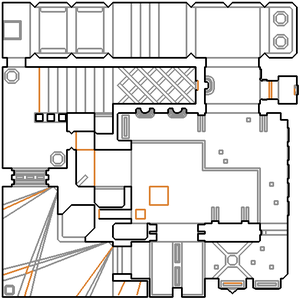 Map of Autumn in Hell
Letters in italics refer to marked spots on the map. Sector numbers in boldface are secrets which count toward the end-of-level tally.

At the start, go up the stairs and make a hairpin turn to the right. Drop down into the opening in the nukage slightly to your left and use the lift to your right. Make another hairpin turn to the right to raise some stairs leading to a switch. Flip it and go back, down the stairs and go through the room to the left. Collect the red key here then retrace your steps back to the nukage. Go through the teleporter, face left and open the red door to find the exit switch.

This level does not contain a Player 3 start position, preventing cooperative multiplayer games from being played with three players or more. On the other hand, there are two Player 2 start positions, potentially causing a voodoo doll to be generated to the left of player 1.

The backpack in secret #1 can be obtained without lowering the panel by straferunning at it from the opposite wall.

The switch found at the top of the building stairs (linedef 889) has a garbled texture. This is a nodebuilding error caused by the then-current version of ZDBSP, which occasionally did not write a level's SEGS data correctly.