MAP05: Calculating Under Pressure is the fifth map of Avactor. It was designed by Eradrop and uses the music track "". The par time defined in the DEHACKED lump is 35:00. 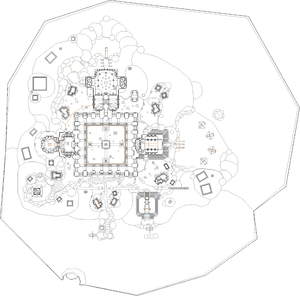 Map of Calculating Under Pressure
Letters in italics refer to marked spots on the map. Sector, thing, and linedef numbers in boldface are secrets which count toward the end-of-level tally.

This level revolves around a central arena where waves of monsters will appear. When you first enter, the red skull key will lower on a pillar. If you are not prepared (particularly if starting with a pistol) it would be wise to spend a little time gearing up before triggering the first big fight. One of the secrets can be quite helpful in that regard.

When you're ready, collect the red skull key in the arena and deal with the first wave of enemies. Then open the red door and follow the path, hitting the skull switch, being ambushed in the lava, and hitting another skull switch to restore the bridge. On the eastern shore, the dock will sink as an invasion fleet appears. It isn't necessary to fight the fleet; you only need to reach the teleporter on the ship.

Back in the arena, the yellow skull key lowers. Collect it to start the second wave. More enemies will teleport in after a short break. Open the yellow door, climb the stairs and hit both the switches (avoiding the crushers), and continue on to a teleporter back to the arena. The blue skull key lowers, heralding the third wave. Collect it when you're ready.

When approaching the blue temple, the stairs collapse. Take the newly-lowered teleporter instead and you'll end up back in the arena behind the third door. Pull the face switch to lower the bars and proceed. In the next room are four switches; each releases a different group of enemies. After hitting all four switches you can proceed outside to a teleporter. On a ledge overlooking the blue temple, a switch restores the stairs. Teleporting lands you back into the arena with a fourth wave active. Collecting the BFG 9000 on the central pillar releases a few more enemies. Finally, climb the blue temple, ride the elevator down, and exit the level.

* The vertex count without the effect of node building is 19931.