MAP05: Camara Obscura is the fifth map of Erkattäññe. It was designed by Nicolas Monti and uses a rendition of the track "Eyes Without a Face" by Billy Idol, sequenced to MIDI by Nicolas Monti. 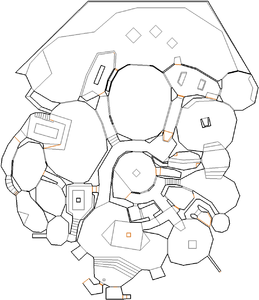 Map of Camara Obscura
Letters in italics refer to marked spots on the map. Sector numbers in boldface are secrets which count toward the end-of-level tally.

There are three keys on the map. The order in which the red and yellow keycards are found is not important.

The key is on one of the three platforms at the north of the map. Unless you have shotgun, go to a room to the left where a shotgun lies. In any case, go to the staircase in front of you (east). In the room, descend on the lift. If you want super shotgun go to the right and all the way eastward to find the weapon on a dais. After, return to the lift and go to the north. Take the staircase to get to a room. Press the button in the room, so you can now jump on the first of the platforms. Return to the staircase and keep going eastward. Move up with the lift and go northward to a door. In the room, the wall leading outside to the platforms is open. Go there and jump over the first platform, then second and finally, the last one to get the red keycard.

When you found the red key, drop off the platform and take one or two nearest radsuits. Then, head north-eastward. Take rocket launcher in the first room and go to the second room. Before going up the staircase, enter the pillar to find an armor. Go to the third room via the staircase and notice the other stairs (west). Walk there up. Take the right and you will come to a room with the yellow key pillar. Jump on it to take the keycard and fight the spawning enemies.

With the red and yellow key, head all the way to the starting point (south west). In the room where you found the shotgun (or still did not), there will be key bars. Open them all and proceed on linear path to the lift. In the room, first kill all the chaingunners and go up the stairs into the cage. There is the blue keycard at the end. When you take it, the central platform containing a hard ambush will lower. So deal with it and return to the lift via pressing the switch.

Get back to the staircase, like as you did when finding yellow key but this time, take left rather than right. You will find the blue door (east). Open it to find a switch inside. This switch will open the area with the teleporter. Go there but mind the revenant. If you want you may visit an optional room with armor, bulk cell and imps. In any case, use the teleporter, and you will in a narrow room with one or two revenants. Deal with them and flip the switch to reveal another teleporter. Enter it. Now, walk the stairs toward the exit door. You will find the finish behind.

A multiplayer-only BFG9000 (Thing 217) has no flags set for any of the three difficulty classes, so it does not actually appear in the level.

* In erkaknee.wad the count of radiation shielding suits is 24.