MAP05: Catwalk is the fifth map of PlayStation Final Doom, and the fifth map of the Master Levels episode. It is based on the PC version of MAP01: The Catwalk from the Master Levels for Doom II, with modifications to accommodate the PlayStation's framerate and storage capacity limitations and add enhancements such as colored lighting. It uses the music track "Malignant".

This level is known as The Catwalk on PC and its author was Christen Klie. Changes for the PlayStation port were authored by Tim Heydelaar.[1] 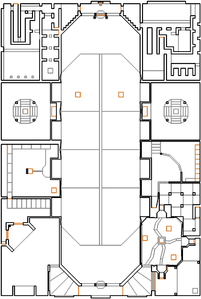 Map of Catwalk
Letters in italics refer to marked spots on the map. Sector, thing, and linedef numbers in boldface are secrets which count toward the end-of-level tally.

From the starting position, head east across the moving floors to a room with barrow bridges over water. Step on the light lamp in the middle then press the switch which is revealed in the south alcove, followed by the east switch and finally the north switch. Go back to the alcove where you pressed the east switch and walk through the door that has opened. Press the switch behind one of the metal columns, which will lower the platform holding the yellow skull key which you should collect.

Press use on the computer screens by the west wall to open them, and head back across the moving floors to the start point. Go west from here and cross more moving floors to an outdoor area. Open either yellow door and press the switch in the south-west corner of this room, which will raise a bridge in the next room to the north. Follow the nearby staircase down and it will lead you to a teleporter. Step through to another outdoor area and press the switch in front of you, lowering the platform with the plasma gun. Step on the teleporter in this area and it will return you to the start point.

Go east to the room with the water pits and head through the northern exit. Head south-east to find a pair of yellow skull bars, open these and press the switch behind them. Now head north-west where you will see a wall has opened leading to another outdoor area. Press the switch to the south which will raise a staircase to the upper floor. Press use on the grey panel in the north-east corner to lower it, then run south across the panels to the teleport pad which will take you to an area with the red skull key in front of you. Take it, then use the nearby teleporter to return to the start point.

* The vertex count without the effect of node building is 1062.