MAP05: Core Infection, designed by Yonatan Donner, is the fifth map of Hell Revealed. It uses the music track "Task Force" from Rise of the Triad.

A technological level. Find the two switches that make the way to the exit. 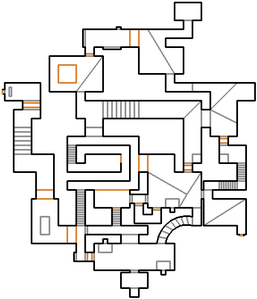 Map of Core Infection
Letters in italics refer to marked spots on the map. Sector, thing, and linedef numbers in boldface are secrets which count toward the end-of-level tally.

You have two paths at the start, either through the left door or the stairs to the right. Grab the shotgun, and kill the enemies in this room, then take the stairs to a room with two mancubi. You now have a choice between the door in this room and the lift. Take the lift up and head right, following the path to a small room with a switch. Pressing this switch lowers a lift in the plasma gun room which is close to the exit, accessible from the left door in the starting room. Before heading there though, you have one more switch to press. Head back to the room which had the mancubi and now take the door to the next hallway, which contains some pain elementals. Follow this hallway to a computer room with a blue square that has a Hell knight on it. Stepping on this blue square opens a computer panel, revealing a passage with some former humans. Take the lift downwards and take the rocket launcher from the left path, then go down the right path. Keep on going down this path until you find a switch to press, and after pressing it, head all the way back to the starting room. Now open the door on the left side and use the lift to ride up to a room with chaingunners and a plasma rifle. You should see a box of shotgun shells to the north, so grab it to make the platform rise. If you want the plasma gun, let the platform rise all the way, then leave and get back on it to make it lower again, and while it is lowering, grab the gun. Then you can use the platform to rise again. This saves time from going back to pressing the switch in the center of the map. At the top, there should be some stairs, if you had hit the second switch before, so climb them and open the door to find the exit.

* The vertex count without the effect of node building is 452.