MAP05: Crash Sight [sic] is the fifth map of Mars War by Nathan Lineback. It uses a MIDI conversion of "intromusic3" by Bjørn Lynne (Dr. Awesome), the tracker module playing in the intro to the Amiga swapper tool Swappit v3.0, which was developed by the demoscene group Crusaders. 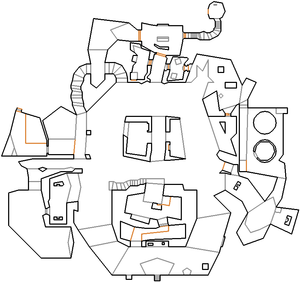 Map of Crash Sight
Letters in italics refer to marked spots on the map. Sector, thing, and linedef numbers in boldface are secrets which count toward the end-of-level tally.

* The vertex count without the effect of node building is 687.