MAP05: Cyber Circus is the fifth map of Hacx. It was designed by Iikka Keränen (Fingers) and John Herndon. 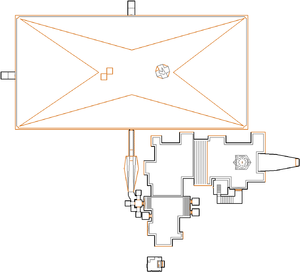 Map of Cyber Circus
Letters in italics refer to marked spots on the map. Sector, thing, and linedef numbers in boldface are secrets which count toward the end-of-level tally.

This map follows on immediately from the previous map. Press the keyboard on the desk twice to activate the screen in front of you and raise a step, then walk into the screen to enter cyberspace; on "I am immortal" (IAA) skill level or higher, two ICEs will be waiting to greet you. Take the enk blind in front of you then look west to see two brown doors - open the northern door to find a 007Microtel then step on any of the bright platforms around you to get a valise, a case of rounds and a case of cartridges. The platforms will lower and take you down to a passage, which you should follow until you enter a large room that contains more ICEs as well as D-men. The invisible floor in this room will gradually lower, allowing more D-men to teleport in.

Once the floor stops moving, inspect the tower near the center of the room which has the C-key on top of it - there are eight unseen walkover lines in an X pattern around the room (see the map to the right), and walking over some of the lines will raise the floor while walking over the others will lower it again. A good strategy is to walk slowly around the room until you notice the floor rise, then walk back and forth over that spot to raise the floor until it reaches the top. Walk straight to the tower to collect the C-key, then step into any corner of the room to teleport back to the initial area. Head north and east to a tower with some moving C-eyes around it, destroy the waiting ICEs and D-men on "Let's rip them apart!" skill level or higher, then look south from the tower to see a door that requires the C-key to open.

Go up the steps behind the door to find an ICE guarding a super kevlar vest and a 007Microtel, then press the switch on the west wall to lower some bars at the top of the tower. Go back down the stairs and shoot any of the C-eyes, then ride the poles they were sitting on up to the top of the tower and press the switch at the top. A ledge to the east will lower, allowing you to run across it towards a brown wall on the other side - the level automatically ends when you reach this wall.

As soon as you enter cyberspace, head straight forward until you reach a pulsar. Time your run past it to get a photon 'zooka, a super kevlar vest, a 007Microtel and a case of torpedoes.