MAP05: Deus Vult is the fifth map of Deus Vult. It was designed by Huy "Doom Marine" Pham and uses the music track "Demons On The Prey" from Doom. MAP05 is the original version of the map named "Deus Vult", while maps 01-04 are the same map divided into four. The text file explains that this is for "people who do not have patience to play through large maps, or do not own a high-end PC". Much of this map was re-used in Deus Vult II's MAP29: Saint Peter's Gate. 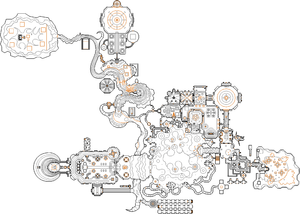 Map of Deus Vult
Letters in italics refer to marked spots on the map. Sector, thing, and linedef numbers in boldface are secrets which count toward the end-of-level tally.

No fewer than 105 imps (Things 5766 through 5870) have no flags set for any of the three difficulty classes, so they do not actually appear in the level.

* The vertex count without the effect of node building is 21723.