MAP05: Disdainful is the fifth map of the Newdoom Community Project. It was designed by Dennis Meuwissen (Exl). 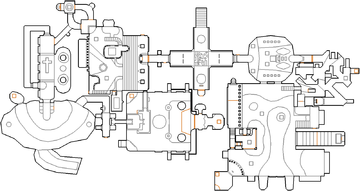 Map of Disdainful
Letters in italics refer to marked spots on the map. Sector, thing, and linedef numbers in boldface are secrets which count toward the end-of-level tally.

Hit the switch at the other end of this intersection. This will open the door on the left, eventually leading into a large, zombie-filled chamber. Your next switch is in the southwest corner, opening up the northwest corner. At the end of this hall is a baron of Hell and a berserk pack. The faceted wall opens revealing a soul sphere, which, when picked up, opens a hall to your right. This in turn leads to another hallway which goes outside. Out here, you have to drop into the water and follow it east into a marble tunnel with another switch. Look out for revenants, and go eastward into a huge marble chamber.

The east door opens as you approach it, revealing an arachnotron and a small room. Grab the lone medikit and you will open a number of doors. What you need to do now is head into the northwest corner of the room, but do not take the teleporter yet. Hidden close to the water canal is a switch, make sure you press it before teleporting back to the top of the canal. Now, go back through the water and a cave with a baron and another teleporter should be open. Using the teleporter takes you back to the zombie-filled chamber, telefragging the revenant if you have not killed him already. A room with shotgun guys and an imp is open to the south. Go here and find the switch. This allows access to another switch in the zombie-filled chamber in the northeast corner. Hit this switch, and go back to the four-way intersection where your starting point was to find the eastern path is now open.

Ignore the switch and drop down into a marble room with lava in the middle. You cannot escape from this lava, so do not fall in it. If you hit the switch back in the marble room with the canal, there should be a path leading from Secret #3 to the alcove where the mancubus is located, allowing access to both. If you did not press that switch, you will not be able to get the secret and escape, but you can still jump to the alcove on the east. Once there, open the door into a blue-floored, maze-like section. Watch yourself here, as lost souls can come out of the walls to ambush you. There are two switches you can initially press in the maze. The switch in the southwest part of the maze opens Secret #5, and the southeastern switch guarded by a revenant opens a room in the western part of the maze, containing imps and another switch. This one opens a room with a teleporter into a large courtyard. Here, imps will attack you from ledges. If you pressed the switch in Secret #6, you will be able to access Secret #4. The switch on the ledge with the shotgun guys opens up some bars leading to the exit door. An alcove to the west has another switch which opens up a door on the other side of the building. Hit both switches and head to the building through the southwest entrance. Head north up the stairs and approach the faceted wall. It will lower, but also it will lower the eastern marble wall. Go here and walk to the tomb and behind it is another switch which opens up the exit door. Inside is an arch-vile, the exit, and an additional teleporter in case you want to go back for secrets and other things you may have forgot.

* The vertex count without the effect of node building is 2876.