MAP05: Elixir is the fifth map of Community Chest 2. It was designed by Rob "RjY" Young. It appears to be set in and around a factory that manufactures health bonus potions (hence the title). 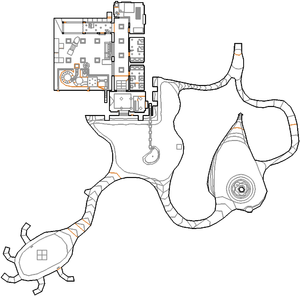 Map of Elixir
Letters in italics refer to marked spots on the map. Sector, thing, and linedef numbers in boldface are secrets which count toward the end-of-level tally.

You need to constantly be on your toes in this map, as monsters are liable to teleport just about anywhere around you. At the start you will be under attack by some zombiemen, so be sure pick up the supplies nearby. When you head down through the cave, you will reach a large open area with lots of zombies in it. Actually entering this area causes more monsters to teleport, some even back at your starting point. There are two ways to reach the yellow key to the east. The southern way is safer, but if you go the northern way, you will find a berserk pack. Just be prepared for demons when you grab it. About halfway through the northern path, you could get ambushed by spectres. Once you reach the yellow key room, you will find it is stuffed heavily with zombies, and grabbing the key and the super shotgun triggers even more monsters teleporting in. Head back to the other large area in the cavern, and with the yellow key you are able to enter the complex. Inside, you will find that it is heavily congested with monsters. To open the bars to the big hallway here, the switch is near the computer desk in the lobby, but approaching it triggers two Hell knights to spawn in. Also, if you are getting secret #1, look out for spectres that teleport when you get the secret.

In the big hallway, look out behind you for revenants and imps which spawn in. The room closest to your right has a chainsaw if you want it. You will eventually need to head into the big cargo area that can be seen through the windows. There are two ways to reach it. You can open the door or press the switch to lower the cargo lift. Either way, prepare to fight, because there are a ton of enemies in here. To get the blue key, there are ladders you can climb to reach it, but both approaching and grabbing the key will cause many enemies to teleport into the cargo bay. After grabbing the key, head back into the large hallway and take the blue door into an office room. You have to climb the window slightly in order to get the red keycard. Again, be on the lookout for a lot of teleporting monsters as you exit.

Go back into the cargo bay and go to the far southwestern corner. Unlock the blue switch and then the red switch and then press this final switch. This triggers a lot of teleporting monsters. You will have to go all the way back to the entrance of the level at this point. To get out of the large hallway, there is a switch that opens the bars, and to get out of the lobby into the cavern, you need to press a tiny switch just on the right of the door. At the starting point, you will have to fight a cyberdemon or a spider mastermind depending on your difficulty level. To exit, walk onto the exit sign onto the higher floor, and then move around the skull poles towards the other exit sign.

In ZDoom, the glass windows that cannot be shot through are not rendered correctly, appearing as Hall of Mirrors effects.

* The vertex count without the effect of node building is 2811.