MAP05: End of the Line is the fifth map of Midgard Outlaw. It was designed by Mike MacDee (Impie) and uses the music track "". 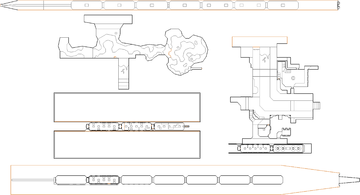 Map of End of the Line
Letters in italics refer to marked spots on the map. Sector, thing, and linedef numbers in boldface are secrets which count toward the end-of-level tally.

Juno managed to board Drogo's train just as it left the station, and fights her way inside to reach Drogo and Dawn.

You begin on the back of the train, outside. Kick the oblivious Shieldmaiden off the train and sidle along the side until you come to an open window: climb inside and shoot your way through the next few cars. You will encounter Drogo a second time, but he closes the door before you can reach him. Hit the switch to unlock the lift in the previous junction, then use it to get onto the roof of the train.

By this point, the train has entered a tunnel, so don't get hit by the tunnel light fixtures whizzing past every few moments. A handful of Amazon Commandos are waiting for you up here: get past them and drop into the locomotive, then kill the conductors and hit the switch to stop the train at the next goon-infested station. A switch in the nearby control room opens the gate to the city above. Another switch, located on the roof of the large building across the canal, opens the gate to the ocean. Grab the outland suit and dive in. Swim right and kill the boss to open the way to the exit switch.

Several frogmen armed with harpoons are waiting for you at the end of the map. They deal horrific damage, and can walk on the ocean floor or swim over your head. Make sure to keep some rockets handy, or practice moving and shooting with the ballistic knife: one or two blades will drop him.