MAP05: Flipside is the fifth level of Icarus: Alien Vanguard, set in a simulation of an upside-down building. It was designed by Mark Snell (Kram Llens) and uses the music track "Mad" by Jeremy Doyle. 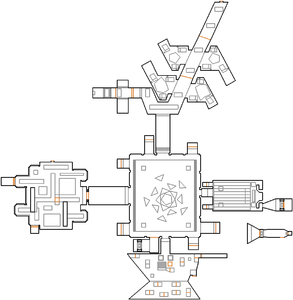 Map of Flipside
Letters in italics refer to marked spots on the map. Sector numbers in boldface are secrets which count toward the end-of-level tally.

Emerge and grab the shotgun in the middle if you need to, looking out for imps who teleport from the windows. If you are in the middle of this room, there are stairs on the west and east sides. This area has four ways of travel. Go north first, towards the area with Wolfenstein 3D textures, and go all the way to the switch that you see on the right. Look out for the enemies behind you after you press it, and head back to the entrance of this area. This time, go left towards the open passage, and three walls will open up revealing several monsters. Head towards the closet that had a lone imp in it and the wall will open revealing a chaingunner and a blue skull key. Return to the main room and head south. In this gray room, there is a teleporter right here, as well as another one if you climb the steps. Take the one on the ground first, and take the subsequent teleporters (picking up a super shotgun along the way) until you arrive on a small platform to the east. Turn right and hit the switch here. Now take the teleporter at the top of the steps and take the subsequent teleporters until you arrive at the platform with the corridor. Grab the yellow skull key at the end of this corridor, and watch out for imps that teleport into the area. Go back to the main room and head west, through the yellow door. In this room, manuever around the computers to the north side of the room and hit the switch here. This will lower several computers in the room with monsters. One has a box of shotgun shells and the other has the red skull key. Make sure you grab the key, and then return to the main room going east this time. In this terraced area, head for the far right corner and you will find the teleporter to get out of here. Press the furthest panel from the right to exit.

As with other Icarus levels with teleporter exits, a suicide exit can be performed in the exit room. The only rocket launcher is multiplayer-only, so monsters must be used. To do the trick, lead imps into the simulation exit portal from the wooden room nearby. Then, let them damage you until an imp fireball can kill you, and run toward the teleporter as at least one imp throws one. If you do this correctly, your corpse will slide under the barrier and into the teleporter to finish the level.