MAP05: Flooded Chapel is the fifth map of Plutonia 2. It was designed by Adolf Vojta (Gusta), and uses the music track "Deadly Town" by James Paddock. The par time defined in MAPINFO is 1:30. 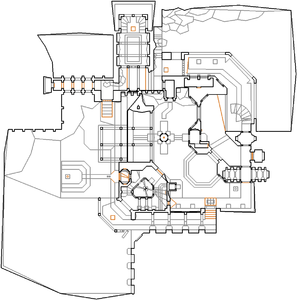 Map of Flooded Chapel
Letters in italics refer to marked spots on the map. Sector, thing, and linedef numbers in boldface are secrets which count toward the end-of-level tally.

First off, get rid of the monsters attacking right away. When that is done, head into the chapel on the right. Grab the rocket launcher and the wall will lower revealing some mancubi. Climb the steps here and go south, then west across a bridge to a wooden door. Open it and you will find a lion switch with blue markings to your right. By pressing this switch, you lower the blue key which is just southwest of the building you were in. Grabbing it triggers an ambush, so be prepared to fight. When that is done, return to the watery area where you climbed the steps before and head north and west. Get close to the bars, and the doors nearby will open up, revealing revenants while other enemies teleport in. Kill them and open the bars with the switch. Enter the teleporter, and you will appear in the middle structure at the center of the map. You are also on top of the yellow skull key as well. Go north and a bridge with shotgun shells will rise, allowing you to enter the next chamber. There are a few monsters guarding the red skull key to the north, and an arch-vile constantly teleporting to the west. Kill the arch-vile and press the lion switch with red markings, then return to the red key which you can now get. Another ambush will be triggered, so kill the monsters, then head back to the switch you pressed earlier. You might have noticed some yellow bars earlier, so open them and head south, back to where the blue key was, then enter the building. Head up the stairs leading north and you will find blue and red bars you can open. Press both switches in this room, looking out for the arch-vile, then take the exit to the west.

Linedef 1525 does not have a texture on its front lower side. This linedef is one of the steps leading up to the red keycard; it is the first step on the right and shows as an HOM.

With a little luck, you can complete this level in less than 10 seconds on UV or NM. If you grab the plasma gun near the level's exit in the southwest, an arch-vile will teleport in, and you can use it to arch-vile jump over the red and blue skull bars blocking the way to the teleporter. You can't do this on HMP or lower, because a revenant will teleport in instead of an arch-vile.

* The vertex count without the effect of node building is 2051.