Unchecked
This level occupies the map slot MAP05. For other maps which occupy this slot, see Category:MAP05.

Map05: Garden of Calm is the fifth map of Project Einherjar, designed by Impie in 2016 and constructed in Doom Builder 2. 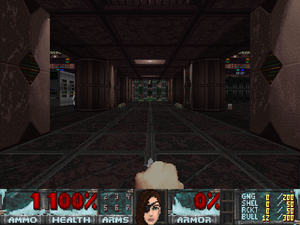 The start point. Ahead is the gate to the garden.

Juno can enter the garden directly through the main gate, or head right and access it from the observation platforms. The former path is the quickest route to the sealed power plant entrance, where an Amazon Commando guards the yellow key. The latter path takes her directly to the locked red exit door, and the office with the blue key; following the path up the elevator, it eventually leads to the switch that opens the blue door.

The blue door opens to a Juggernaut stampede and a network of electrified tunnels leading to the reactor core. Using the yellow key on the core switch shuts off the reactor and opens both the reactor room doors and the door to the testing lab in the red door hall. It also triggers a massive Juggernaut ambush by opening all stasis tubes seen throughout the garden. Go to the testing lab and kill the Einherjar for the red key. 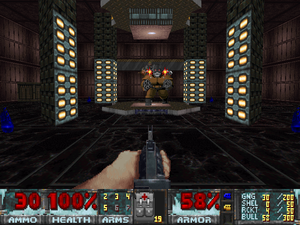 The Einherjar opens fire on Juno while Dr. Gaul watches the fight from the observation booth.

When Juno enters the testing lab, the door seals behind her, and the machine at the center of the room dramatically opens to unleash the first Einherjar of the game. The power nodes provide cover from its machine guns and rockets and should make it easy enough to circle-strafe around the beast until it dies. If Juno got the Dessler Frag Cannon on MAP02: Human Processing (or the hidden sewer beneath the canal), she can kill the Einherjar with a handful of rockets.