MAP05: Gear Up is the fifth map of Sunlust. It was designed by Daniel Jakobsson (dannebubinga), and uses the music track "Lord of Space" composed by James Paddock. 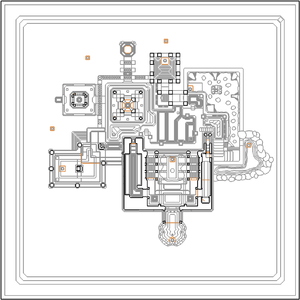 Map of Gear Up
Letters in italics refer to marked spots on the map. Sector numbers in boldface are secrets which count toward the end-of-level tally.

There are no keys on the map. Instead, the player has to touch nine pillars in order to unlock the exit portal. Armor bonuses are placed on each pillar. Normally, they sink down to the floor when they are touched or if the player comes closer to them. It does no matter in what order they are activated, however the order is advisable as shown in the numbered list below.

When all nine pillars have been activated you are ready to finish the level. Go the place where the building in which you activated one of the pillars is. The exit portal is north from here.

* The vertex count without the effect of node building is 6450.