MAP05: Ghost Town is the fifth map of The Plutonia Experiment. It was designed by Milo Casali and uses the music track "Hiding The Secrets", the music for most secret levels from Doom.

This level was also ported to PlayStation Final Doom as MAP27: Ghost Town. 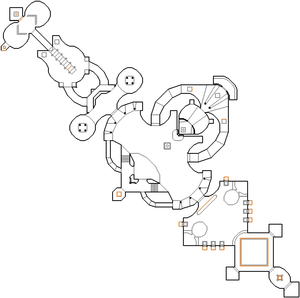 You start in a small room with a walkway in front of you with a shotgun on it. On both sides of the walkway are windows with commandos in them. Kill them if you want, then proceed forward and grab the megaarmor. In this room are two columns blocking access to hallways behind them. Hit a switch on either one, and a baron will lower on both of them. Kill them, then proceed down either hallway, wary of the revenant at the end. You will be overlooking a large courtyard with cacodemons, demons, and mancubi. There are also a pair of lifted platforms at each end with commandos. Clean out the room in whichever way suits you, then proceed to the southeast walkway.

Take a few steps into the room, and you will be greeted by commandos on each pillar and a spider mastermind, as well as a pair of arachnotrons on raised platforms. Move out, mash whoever is in sight, and move back to cover. When they are dealt with, collect the rockets on the platform the spider mastermind was on, and grab the blue keycard in the room leading off of the one you are in. This will release a bunch of revenants, so run back to the courtyard fast, with commandos sniping at you too. Once back, take the teleporter in the southwestern corner of the room, grab the plasma Rifle, and jump to the megasphere.

Head to the northwestern walkway, and mash the commandos on the platforms in the room leading off. Behind the northeastern platform is a rocket launcher which you can get if you want. Head into either hallway, grab the armor, and head into the room with the stairs. Kill the commandos at the top, and quickly run all the way up the stairs. Peek down and you will see some arch-viles coming after you. Once they are in hell again, kill the commandos that also showed up, then open the door, which will release six barons and an arch-vile, so run down the stairs, then kill them. Go back up, kill the arch-vile, and hit the switch, which will open the door you tried to open, releasing three more barons. Kill them, then step on the exit pad.