MAP05: Hanger is the fifth map of TNT: Evilution. It was designed by Jim Dethlefsen and uses the music track "More" by Tom Mustaine[1]. 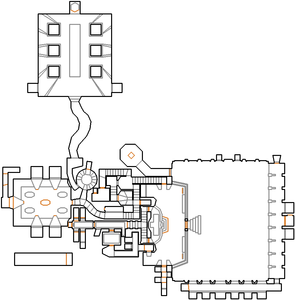 Map of Hanger
Letters in italics refer to marked spots on the map. Sector, thing, and linedef numbers in boldface are secrets which count toward the end-of-level tally.

To get out of the starting area, try going toward the panel in front of you. A door will open, and unleash a Sergeant on Medium or Hard difficulty. Kill him, then enter the passage he came from. Repeat four times. The fourth time, the way into the main area will open.

You will be in a room facing a darkened room and a hallway with openings filled with enemies. Enter the door on the north side. Follow the step of steps and turn at the first left and proceed south towards the end then west until you reach a room with the blue key. Every ledge has a distinct black "face", which, when "activated" (by pressing Spacebar directly when facing it), will temporarily lower the platform at the corresponding opposite corner of the room (the northwest ledge lowers the southeast platform and so on). "Activate" the black face of the ledge where the blue key sits and the small center platform (which contains an energy cell) will lower. Once you step on this platform, the ledge with the blue key will lower, allowing you to grab it. Grab the key and return towards the large main area and enter one of the doors on the west side where you came through. Proceed towards the starting area until you reach a door on the south wall on the starting corridor. Enter it and then the blue door and proceed through the area until you get yellow key in an alcove along a north/south small corridor. Once you get the key ride the lift on the eastern most part of the area and you will return to the main area. Go through the large door and enter the darken area and proceed towards the northwest corridor through a yellow door. Enter the teleporter at the end of the room and you will be in the hallway with the multiple zombies and Imps as well as barrels. Grab the red key on the north end of the corridor and drop towards the corridor.

Go through the door and return to the starting area. Enter the red door and exit the level.

* The vertex count without the effect of node building is 1320.