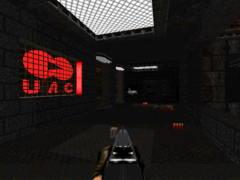 MAP05: Hardware is the fifth map of UAC Ultra. It uses a music track from Abuse. 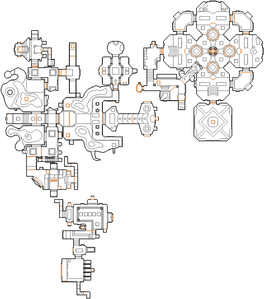 Map of Hardware
Letters in italics refer to marked spots on the map. Sector, thing, and linedef numbers in boldface are secrets which count toward the end-of-level tally.

This map features a freezer room that the player must go through to complete the map, meaning the temperatures in the room are below freezing and cause the player to slowly freeze to death if he/she is not wearing a radiation shielding suit. Due to the rank conditions of the underworld, monsters remain immune to the extreme temperatures, and still summon the strength to hurl fireballs.

Grab the shotgun and turn around, killing imps and pressing the switch to open the door. The red door is straight ahead, so turn right and follow the path. Grab the armor as you go and use the switch to lower the lift down. Grab the chainsaw and chaingun as you traverse through this next area. Past the mancubus, head north through the vent to a new area. The switch in this next room opens up compartments with zombiemen inside, as well as opening the freezer room. Make sure to grab a radiation suit before heading inside.

An arch-vile, as well as a revenant on Hurt Me Plenty or higher, guards a switch which raises stairs allowing you to continue. Follow along the catwalk, killing the pain elemental(s) and other enemies until you reach the next switch, grabbing another radiation suit if necessary, and then enter the next teleporter. You are now out of the freezing chambers. Kill the Hell knight here, but do not take the teleporter he was guarding unless you need to go back. Instead, crawl through the vents to the next area. Taking the lift up reveals chaingunners (and shotgun guys on Ultra-Violence or higher) and the red key.

Leave this room through the red door and then take the door to the east now. Take the lift up, kill the enemies here, and take the next teleporter. This will take you back to the start. Now open this red door and approach the edge for a bridge to rise. You need the yellow key to open the big door in front. Go to the left of it and through the next area, flip the switch to be ambushed by several monsters. The switch behind where most of the monsters were opens the door to the yellow key, guarded by an arch-vile.

Now open up the big yellow door and head up to the teleporter killing imps and chaingunners as you do so. Kill the cacodemons on the other side, and open the next door. You will be in the exit chambers, and all you can do now is follow the path as it goes clockwise, killing anything in your way. When you reach a set of steps, use them and open the next door. Go through this area, using the switch to take the lift up and pressing the hand switch, then backtrack to find some arachnotrons. Head towards the indentation in the wall to rise up to the exit.

This is one of two maps where it is possible to obtain a BFG9000. However it is sealed by four security barriers which are opened by very well hidden switches throughout the map. The four switch locations are as follows:

In v1.2 (GZDoom), Secret 7 is triggered by a line def which is out of reach of the player. Noclip is required for 100% secrets.

* The vertex count without the effect of node building is 3033.

This map was made mostly by Super Jamie, with the area after the Yellow Key Door teleporter being 40oz' creation.

The entrance to this map is very similar to Jan Van der Veken's classic11 as a tribute to that author, classic11 being one of Jamie's favorite maps.