MAP05: Hell's Kitchen is the fifth map of Memento Mori. It was designed by Orin Flaharty, and uses the music track "Galaxy" by Mark Klem. 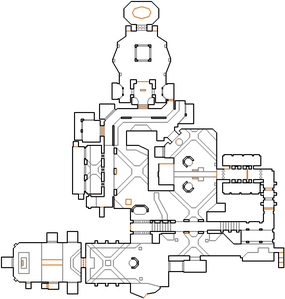 Map of Hell's Kitchen
Letters in italics refer to marked spots on the map. Sector, thing, and linedef numbers in boldface are secrets which count toward the end-of-level tally.

Run straight forward. Go around the hall until you are faced with two sets of bars. Press the skull switch to the west, and walk along the platform to the southern switch. Push it, and jump onto the lowering platform to grab the red key. Run to the satyr switch in the northwest, and press it to regain access to the walkway. Go to the red bars in the west, open them, and run across the bridge to the western switch. Flip it, and enter the teleporter to the south. Jump into the slime pit to the north, and press the satyr switch to the northwest. Get onto the lift, and then open the red door in the northeast. Descend to the floor below, and enter either one of the teleporters. Hit the switch in front of you, and jump down once more. Go through the northern opening, and step into the hole.

Secret #3 can be used to circumvent the need to lower the bars into the last part of the level. Furthermore, you do not need to lower the bridge to trigger the switch, as you can flip it while standing at the bridge's western end, no matter how high or low you are. Similarly, the switch that lowers the bars blocking the exit can be triggered before it is raised, by facing north, and pressing the "use" key while standing at the center of the platform.