MAP05: Infested is the fifth map of 1 Monster. It was designed by Philip Brown (Liberation) and Mark Pedersen (Macro11_1), and uses a MIDI rendition of the song "Zombie" by The Cranberries.

Like all maps in the megawad, the map features only one type of monster, the demon. Set in an overrun facility, the map features frequent battles against hordes of demons, sometimes with barrels or other environmental features that facilitate combat. 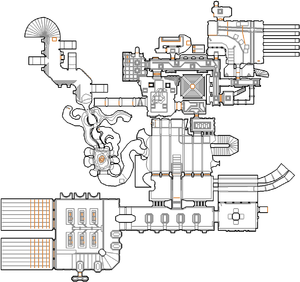 Map of Infested
Letters in italics refer to marked spots on the map. Sector, thing, and linedef numbers in boldface are secrets which count toward the end-of-level tally.

Grab the shotgun and kill the demons, then leave the first room through the door to the north. You will get attacked by demons in the corridor, but a line of barrels upon the wall will make it easier to kill them. Turn right and open the door at the end of the hallway. Proceed down the air duct and open the misshapen white door. As you pick up the berserk pack, the floor will lower and you will be forced to fight several demons. Go up the stairs here to leave, go up the lift and head to the switch. It will allow you to open a door, where pressing another switch will give you access to a teleporter. You will end up in the room with the red keycard. Grab the key, then press the switch to open the door and leave.

Go back to the room where you started the map, open the red key door and go down the path until you descend the stairs to a floor made of red rock. It is a damaging floor, so the radiation suit will come in handy. Enter the cave opening directly opposite of where you are, then head to the cavern with the column of green slime. The green slime is safe to stand on, but the red rock is not. Enter the opening to the right where you will find a switch that will give you access to two other passages in that cavern. Enter the left one, take a left and press the switch, then drop down into the center passage which leads to a large corridor with the blue key at the end. Pick up the key, but beware of the hordes of demons that will be released.

Go back to the outdoor area, and ascend the stairs to the ledge overlooking the red rock floor. Here, open some blue-key locked bars and press the switch to create stairs that will allow you access to the door to your left. Head inside. Collect some ammo from the rooms to the left and right, then head down the center passage. Turn right, then descend the stairs. Quickly press all the switches on all the computer consoles in order to activate the crushers -- they will help you to deal with the massive wave of demons. Once your path is clear, go back up to the room where all the barrels were, then go down the other passage in order to arrive at the exit switch (it is accesible through pressing the north-western switch in the crusher room).

In the corridor you enter at the beginning, you can open the north door to find yourself in a room with some ammo, as well as green armor, a health bonus and some armor bonuses.

It is possible to get stuck in the map if, after getting the red keycard, you go back and drop down into the pit where the first berserk pack was. You will then be trapped, unable to get back up to the door or to get to the teleporter through the metal bars blocking your way.

The wave of teleporting demons in the red key room will only appear if the player wakes them up by firing a shot inside that room, or any other connected to it (such as the starting room). Thus, if at the beginning of the map you avoid firing in the first room and shut the first door after going through it, the wave will not appear.

* The vertex count without the effect of node building is 6589.