MAP05: Insatanity is the fifth map of Hell Revealed II. It was designed by Jonas Feragen and Derek MacDonald, and uses a music track by Sam Woodman. 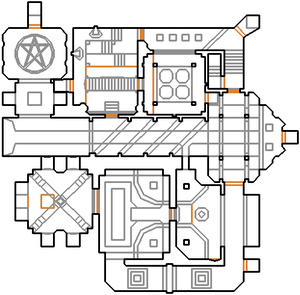 Map of Insatanity
Letters in italics refer to marked spots on the map. Sector, thing, and linedef numbers in boldface are secrets which count toward the end-of-level tally.

Kill the nearby shotgun guys and you will have to drop down to ground floor, as the two other doors require the yellow key. Open the door at the small steps and you will find yourself in the middle of a dirt canal. To the left are shotgun guys and to the right are demons and Hell knights. Kill the monsters and go right, and you should see a rocket launcher, chaingunners in cages, two arch-viles, and the yellow keycard. Go back to the starting room and then open the yellow door that is across the bridge (it is not the one that you first come across as you are heading back; although you will obtain the blue keycard, you really do not need to take that key to finish the map). Open the door and when you approach the red keycard, chaingunners will spring up. Kill them and return to the dirt canal. Run to the end where the shotgun guys came from, which has a fountain with health bonuses. Turn south, open the door, and follow the path to a room with two more doors. The one on the right leads to a room with a super shotgun, but you will spring a trap if you get it. The other is the red door that leads to the exit room. Kill the chaingunners inside and flip the switch to lower the exit teleporter.

* The vertex count without the effect of node building is 951.