MAP05: Installation Decrepit is the fifth map of Community Chest 4. It was designed by Alice Jameson and uses "The Dave D. Taylor Blues," a music track from Doom II by Robert Prince. 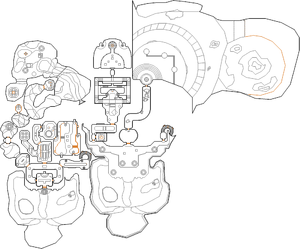 Map of Installation Decrepit
Letters in italics refer to marked spots on the map. Sector, thing, and linedef numbers in boldface are secrets which count toward the end-of-level tally.

You begin in a courtyard facing a large building. Two zombiemen, two shotgun guys (Hurt me plenty and above) and an imp (Ultra-Violence and above) face away from you. Take them out, but do be wary of up to four imps and a cacodemon on the surrounding ledge. Pick up the super shotgun ahead and enter the building.

Once in the building, head through either door to find a U-shaped corridor. This corridor has up to six shotgun guys, four imps and four chaingunners. You can't use the red and yellow doors in this corridor yet, so you'll have to go through the door in the north into a computer room. This room has three imps, two zombiemen, two shotgun guys and a chaingunner. Head to the east of the room and pick up the armor, then go through the door in the northwest of this room. Follow the short corridor around and kill three imps, then open the narrow metal door.

This leads to a small room with a ledge surrounding a slime pit, as well as a cage with a mancubus. Head counter-clockwise along the ledge, killing the mancubus and the five imps on the ledge. Open the door in the southeast to reveal another, larger room with a slime pit, split by three sets of ledges. Kill the two imps on the middle ledge, as well as the two chaingunners and one shotgun guy at the far ledge. Head to the north side of the ledge you are on and flip the switch on the panel. This raises bridges across the slime. However, this causes four shotgun guys to teleport into the room - one on the ledge you are on, three on the middle ledge. Cross the bridges to the far ledge to get the red key, which causes the first set of bridges to sink. Flip the switch on the wall to raise another set of bridges, which will let you cross back to the near side.

You will now need to backtrack to the U-shaped corridor earlier to find the red door. On your way back, take note of the following teleport traps:

In the U-shaped corridor, head through the red door in the northwest. Kill the three imps and two shotgun guys in this lobby, then head forward into a cave-like area with three imps. Enter the capsule and lower it to the lower part of the caves. Open the capsule, then kill the chaingunner and shotgun guy (Ultra-Violence and above only).

The shrill cry of a spiderdemon marks the approach of a large number of enemies - mostly shotgun guys and imps, but also up three (two on Hey, not too rough and below) Hell knights. Head forward through the first archway, funnel them up and mow them down. Next, head through the second archway and go left (west) at the fork. Watch for a demon (two on Ultra-Violence and above) at the end of the path, then open the door they were guarding. This leads to a small room with a switch panel, guarded by a demon (Hey, not too rough and below), a chaingunner (Hurt me plenty) or an arch-vile (Ultra-Violence and above). Kill the monster and use the switch panel in the room.

Backtrack to the fork and take the right (east) path this time. Follow the slime river and jump down to an arena strewn with barrels and a spiderdemon. You get the "assistance" of two barons of Hell on Hey, not too rough and below and three on Ultra-Violence and above, but none on Hurt me plenty. Get the spiderdemon to fire its weapon at a baron of Hell to lock them into monster infighting, which gives you a chance to find the invulnerability (Hey, not too rough and below) or soulsphere (Hurt me plenty and above) under the northern crusher, the plasma gun and cells in the crate to the south, and the yellow key in the northwest. Collecting the yellow key opens a door in the south, leading to a chamber with a structure that actually is a teleporter. Head into it.

In the U-shaped corridor, head through the yellow door in the northwest. Kill the chaingunners in this next corridor and climb up the spiral staircase to a small chamber. Open the door to access the roof of the building that you entered earlier. On the roof, your main concern is up to three arachnotrons to the right , but don't forget about up to three shotgun guys waiting in a small nook to the left of the door, which will wake up when you fire at the arachnotrons.

Once the roof is clear, head past the blue door and go through the metal door in the east. Head through the passageway and you will come to a room with many barrels and a conveyor belt. Blow up the barrels nearby and on the belt to kill the revenants on the conveyor belt (hopefully). Head up the steps onto the conveyor belt, ride it for a short while, then get off via another set of steps to access the area with a switch panel. Flip the switch to open doors east and west of the switch panel. Follow either door around to the north, then run across the conveyor belt to access the blue key room. Watch for five imps and an arch-vile in here. On hey, not too rough and below, an invulnerability is provided for the next segment.

When you collect the blue key, bars will lower behind you, and an arch-vile and two shotgun guys will teleport in. The bars don't actually block you in, so no need to panic - in fact, they're there to help you evade the arch-vile's blasts. Take out both monsters, then head out with your blue key and ride the conveyor belt out. While backtracking to the roof of the building, you'll encounter up to ten shotgun guys, an additional arch-vile in the conveyor belt room, and two revenants outside.

Finale - Run For It

Back on the roof, go through the blue door. You'll find an enemy-free corridor with corpses and flesh strewn across the floor. Open the door at the end, and prepare to move fast.

When you open the door, you will be in the line of fire of a cyberdemon and two mancubi. On Hey, not too rough and below, you get an invulnerability, and on Hurt me plenty, you get a megasphere to help in this part. On both lower sets of difficulties, you also get a BFG9000. However, on Ultra-Violence and above, you get no power-ups, so you have to rely on your plasma gun to get you through this.

Quickly head north off the platform and run north until you reach the rock floor. After that, quickly make your way east and use your plasma gun or BFG9000 to clear the imps and cacodemons in your way. Keep heading east, and eventually you will find a red line in the rock near a sign marked exit. Cross that line, and you exit the map.

A multiplayer-only BFG9000 (Thing 131) and a multiplayer-only megasphere (132) in the north-west have no flags set for any of the three difficulty classes, so they do not actually appear in the level.

* The vertex count without the effect of node building is 9381.

Secret #3 contains screenshots from the "Charlie the Unicorn" series of animated short films.