MAP05: Into the Fray is the fifth map of 10 Sectors. It was designed by Cephaler and uses the music track " ". 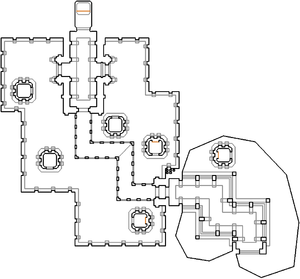 Map of Into the Fray
Letters in italics refer to marked spots on the map. Sector numbers in boldface are secrets which count toward the end-of-level tally.

Take the shotgun and immediately turn around, killing imps and shotgun guys as you follow the path. When you reach what is supposed to be a fork, head left, as the right door is not open for now. Outside, kill any enemies here as you make your way to the southern part of this area. Hit the switch inside the open shack, which will open up several other shacks in this area, with a revenant inside. The other door at the fork is now open, so head to the next outside section. Find the switch inside the open shack here, and then head back through the path, as if you were heading back to the starting position. You will notice that this area has been exposed, and you can enter the outdoor portion from the south, where a rocket launcher is. The lone shack out here has a soul sphere, an arch-vile, and the final switch. After pressing it, head back through the path and then kill the barons of Hell before exiting the map.

This information was last verified in its entirety on 15 January, 2018.

* The vertex count without the effect of node building is 1521.