MAP05: It's a Trap! is the fifth map of Plutonia 1024: The Plutinya Experiment. It was designed by Walter Confalonieri (daimon) and uses the music track "Between Levels", created by Robert Prince for Doom II. The par time defined in MAPINFO is 1:30. 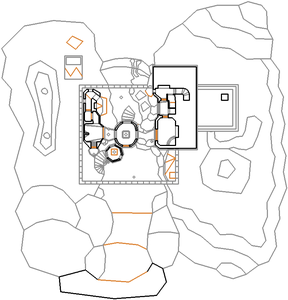 Map of It's a Trap!
Letters in italics refer to marked spots on the map. Sector, thing, and linedef numbers in boldface are secrets which count toward the end-of-level tally.

You start the level in a small circular room. Kill the shotgun guys (and chaingunner on Hurt Me Plenty (HMP) skill level or higher) ahead, then head east and north from the start to get the red skull key; this will cause (depending on skill level) two imps, a Hell knight or three chaingunners to appear on a ledge to the west near the blue skull key. Return to the start and walk west to a red key door, open it then step back to avoid being ambushed by a demon that teleports in. Go through the door and head north through a second door, kill a chaingunner blocking your path then walk forward until you hear a lift lower on your right - ride this lift up to get the blue key.

Taking the blue key will allow imps to teleport in, along with shotgun guys on HMP and a revenant on Ultra-Violence and Nightmare. Return to the start and walk east to a blue key door - before opening it, look south-east and kill one or two knights that are standing behind a fence as they will block your way later. Open the door and kill some shotgun guys and/or chaingunners waiting behind it, open a second door to the north to find a megaarmor then continue following the path past more zombies until you reach a teleporter; it will send you to the ledge that the knights were standing on, where you will find the yellow skull key. Step on the teleporter again then return to the start and open the yellow bars here, before dropping into a pool where some demons will teleport in. Kill or avoid them then walk up the west staircase to find the exit teleporter.

After going through the red key door, walk up the south staircase to a door with a plasma gun behind it.

The data was last verified in its entirety on October 8, 2022.

* The vertex count without the effect of node building is 1123.