MAP05: Klondike is the fifth level of Kama Sutra. It was designed by Adolf Vojta and uses the track "Dracoid Ruins Battle" from Lands of Lore: Guardians of Destiny. In the WAD's text file, the track is incorrectly credited to Heretic.

The map including about 3-4 wall textures and you see it's enough. Start at the little brown cave inspirated [sic] by Dystopia3 [sic] and map11 from Alien Vendetta. Then you get out to surface and walk through gray rocky mountains... and that's all. Another special secret place is included. 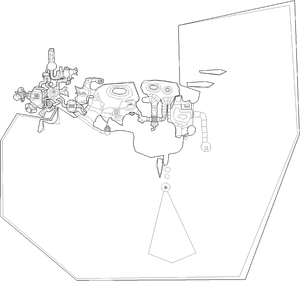 Map of Klondike
Letters in italics refer to marked spots on the map. Sector, thing, and linedef numbers in boldface are secrets which count toward the end-of-level tally.

* The vertex count without the effect of node building is 2734.