MAP05: Last Refuge of the Anasazi is the fifth map of Ancient Aliens. It was designed by Paul DeBruyne (skillsaw) and uses the music track "Toejazz," composed by Stuart Rynn (stewboy). The par time is 4:15. 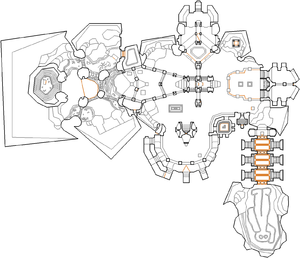 Map of Last Refuge of the Anasazi
Letters in italics refer to marked spots on the map. Sector, thing, and linedef numbers in boldface are secrets which count toward the end-of-level tally.

Once the level starts, you'll want to grab the berserk and security armor nearby and deal with the swath of demons, imps, and zombiemen. Attacking will alert a cyberdemon who will roam the central area for the duration of the level. Exploring the area will find you a shotgun to the west, a chaingun to the southeast (which will teleport in more enemies), and a soulsphere as well as partial invisibility in the northeastern corner. Grabbing the soulsphere will activate a crusher, so be quick. The blue key is located on the north end, up a set of stairs. Picking it up will trigger walls to fall and expose you to some chaingunners, so deal with them and return to the main area.

Head back to the south end, dealing with two Hell knights along the way. Press the blue key switch to lower a set of stairs surrounding the starting area. Climb these stairs and grab the red key, then deal with the ambush that appears complete with two cacodemons. Use the red key on the western switch to open access to a pit. Drop down and grab the rocket launcher to trigger a fight with mancubi and demons. Head into the waterfall to fight some more enemies including two arachnotrons. Pressing the switch in here raises a lift on the northern end. Use the lift and open the door to a small group of enemies. On the other side where you dropped down, a teleporter has appeared that takes you to the yellow key.

Across from the yellow key is a set of bars. Opening these and pressing the switch will elevate you and allow you to access the arena on the eastern end. Deal with the revenants, shotgunners, and a pain elemental before pressing the switch on the far end. This will lower the walls containing the arena, and open the exit door to the south.

* The vertex count without the effect of node building is 4652.