MAP05: Living Hell is the fifth map of Community Chest 3. It was designed by Matthew Gilzinger (doom2day) and uses a modified version of the Doom II music track "Getting Too Tense." It is a remake of MAP28: The Spirit World from the same game. Despite occurring early in the game, it is one of the hardest levels in the megawad. 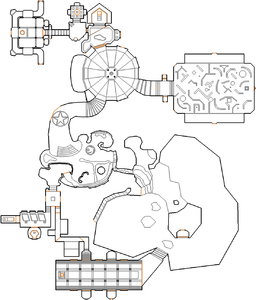 Map of Living Hell
Letters in italics refer to marked spots on the map. Sector, thing, and linedef numbers in boldface are secrets which count toward the end-of-level tally.

In the original release of the megawad, several monster storage sectors with more than one monster in them were erroneously given single-use teleport lines, preventing 100% Kills. This was fixed in the second release.

The linedef that lowers secret #8 will change the sector's type as well as its texture once it reaches the lava pool. Ergo, if you do not step onto the pillar before it sinks into the lava, 100% Secrets will become impossible.

* The vertex count without the effect of node building is 3992.