MAP05: Mechanical Labs is the fifth map of Simplicity. It was designed by Melissa McGee (Agent Spork) and uses the music track "Horizon", originally composed by Tom Mustaine for TNT: Evilution. The par time defined in MAPINFO is 4:30. 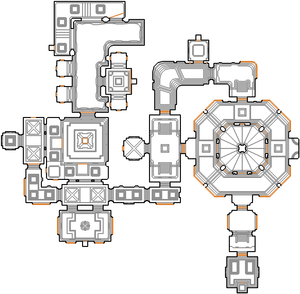 Map of Mechanical Labs
Letters in italics refer to marked spots on the map. Sector, thing, and linedef numbers in boldface are secrets which count toward the end-of-level tally.

Take the shotgun and press the button in front of you, which will lower you into a room with one or more imps and zombiemen (or shotgun guys on Hurt Me Plenty skill level or higher) guarding a backpack. Open the north door to confront two demons along with more imps and shotgun guys, then head up the steps and open the next door to enter a large octagonal room with imps and Hell knights. Go through the west door and take the chaingun ahead, then flip the switch behind it to open the south door (as well as spawning two revenants) and go through to a corridor with imps, shotgun guys and chaingunners. Follow the corridor west and north until you reach a button guarded by one or two knights (there is a super shotgun nearby as well if you need it), press it then go back the way you came - two doors have opened to reveal a room with imps and shotgun guys (or chaingunners on HMP or higher). Flip the switch on the south wall to reveal the yellow keycard behind it - taking the key will cause an arch-vile to appear behind you on HMP, or two on Ultra-Violence and Nightmare.

Go back to where you found the chaingun and head through the north door to enter a corridor with imps and shotgun guys, then open the locked door on the north side to find a teleporter leading to the north-west area of the map. Follow the passage past some imps (and chaingunners on HMP or higher) to get outside, then head south to an open doorway and go through it cautiously - shotgun guys will appear on the upper level of the room ahead, and on HMP or higher they will be joined by chaingunners and two arachnotrons, along with some knights and cacodemons that appear behind you. Activate either of the lifts in this room to reach the upper level, then flip both switches in the south-west corner to lower a platform with teleporter in the middle of the room. Straferun across the gap to reach the teleporter, which will send you to a chamber containing the red keycard; when you approach it you will be ambushed by zombiemen and imps, as well as two revenants on HMP or higher.

Kill all of the enemies protecting the red key, along with two mancubi (four on HMP or higher) that are released outside, to lower a barrier that has appeared on the north side of the outdoor area, then retrace your steps to the large octagonal room near the start of the map. Open any of the locked doors in the center of the room, go inside the chamber and flip the switch on the north switch to end the level.

* The vertex count without the effect of node building is 3913.