Minos' Judgement is a map that is part of the Master Levels for Doom II. It was designed by John Anderson (Dr. Sleep), and is contained in the file MINOS.WAD. In PlayStation Final Doom port it is the eighth level of first episode and uses the music track "Demon Drone". 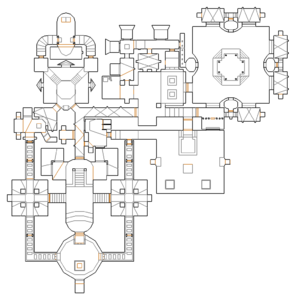 Map of Minos' Judgement
Letters in italics refer to marked spots on the map. Sector, thing, and linedef numbers in boldface are secrets which count toward the end-of-level tally.

Have the shotgun if you need it and enter the southeastern door on the bottom level. In the corridor, you can see the first blue door to your right (at the south). Go left and open the eastern door. In the hall, walk up the stairs before you. The second blue door there is optional. However, you can ease your task by killing the chaingunners behind this door. Press the switch to your right and open the door indicated by a caution sign. Make a jump over the nukage pool to the blue key.

Either jump back or use the stairs at the north to proceed. The red key is located behind the first blue door (at the west). Return to the door and enter it. Once you have gone up the stairs, you can notice two alcoves in the northern part. Jump over into the eastern alcove, and the walls around the lamp will open revealing monsters. Enter inside and pick up the red key.

Drop down and go out of this room via the northern door. Go along the corridor until you reach the eastern door that you opened earlier. In the hall, go left and open the eastern door (that requires the red key). In the outside area, enter the middle structure by walking up its stairs. Grab the yellow key.

The exit teleporter is in the extreme south of the level. Make your way to the room where the red key was found. The door at the south will lead you to a lift, but you cannot enter the south area there. Thus, go down the staircase at the east and enter an area of four pillars. There is also a very similar room at the west that you can use. Go to the southern end and open the yellow bars. If you enter the circular area from the east side, a platform will go down letting you press a switch that reveals a small room with the exit teleporter.

You can find a radiation suit in the nukage area where you get the blue key. When you press the green button on the western wall, the switch wall on the opposite side will lower as a lift. Run there before the suit travels back up. If you press the button on the eastern wall, the opposite switch wall will lower similarly, and you can have a megasphere on it.

* The vertex count without the effect of node building is 2022.

In the Sony PlayStation port of "Final Doom", the stage is simply referred to as "Minos."