MAP05: Obligatory Shotgun Temple Arena is the fifth map of 32 in 24, a deathmatch megawad. It was designed by Nes and uses the music track " ".

This was the seventh submission to the project, arriving four and a half hours into the session, having been built in one hour. The title is an accurate description of the map itself, somewhat unlike most maps in the 32in24 series. 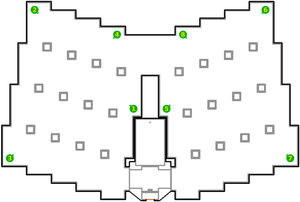 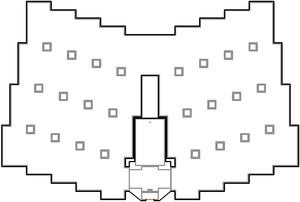 Obligatory Shotgun Temple Arena is precisely what it says it is. It consists of a single room of a moderately large size, made of marble and brightly lit with no ceiling. The arena is littered with small square plinths, too short to hide behind, but tall enough to function as obstacles. Placed atop some of the plinths are medikits, backpacks, and shotgun shells. The line of sight is mostly unobstructed save for the central structure protruding from the south end of the map. This structure can be entered by going to the south of the map, and inside players will find the super shotgun, the only weapon in the map apart from the shotguns that players spawn on, in keeping with the map title.

Players will also find a green armor in this south part of the map, as well as the exit switch, which has not been hidden outside of the map area like in most maps of the WAD. Players may be killed if they press the exit switch, depending on server settings.