MAP05: Phobos Lab is the fifth level of console versions of Doom, based on the original E1M5: Phobos Lab with modifications made to adapt to consoles' limitations. It was converted by American McGee and originally designed by John Romero. The map first appeared in Atari Jaguar version, and is additionally used in the 3DO, Sega 32X, Game Boy Advance, Sony PlayStation, and Sega Saturn versions.

The PlayStation port of this level introduces the nightmare spectre on Ultra Violence skill level. 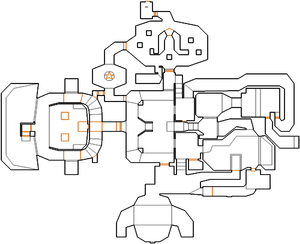 Run across the nukage pool (quickly, as the nukage is harmful) and turn right down the hall. At the end, walk out onto the platform overlooking another nukage pool; this will raise a walkway on the opposite side of the pool.

Turn around, go west back up the hall, and go up the staircase to your right. Walk along the walkway to the east, turn left into the dark passage, and pick up the yellow keycard at the end

Go back down the stairs near the start point, and through the door to the left of the stairs. Follow the walkway around to the right, and you will see a yellow door on your left. Go in, take the lift downward, and turn left down the staircase. As you reach the bottom, two traps will open — one behind you, and one on the corresponding staircase to the north of the lift — revealing four imps (I am a Wimp/Not Too Rough), or eight shotgun guys, four imps, and two spectres (Hurt Me Plenty), or eight sergeants, four imps, and four spectres (Ultra Violence). Continue following this hallway around to the right, until you see a nukage pool on your right with two large columns in it. Run across the nukage, between the columns, and press the switch on the small platform; this opens a door across the nukage pool from the yellow door. As you step onto this platform, the two columns will descend, revealing two zombiemen (IAAW/NTR), or two zombiemen and two imps (HMP), or two zombiemen, two imps, and two shotgun guys (UV).

Backtrack to the yellow door and run straight across the nukage to the newly opened passageway. Go up the stairs, turn left, and follow the passageway to a room with gray and yellow panels. Click the switch in the far right corner of this room, which opens a doorway to a darkened tan corridor. Follow this corridor to a room containing the blue keycard.

Grab the blue key and go down the stairs to the north. At the bottom, you will find a blue door. Open the blue door and enter the dark room behind it - proceed slowly as there are enemies inside who you may struggle to see. Make your way to the north side of this room, where you will see the exit door (N). Go through the exit door and press the switch.

At the yellow key, some players find it helpful to shoot as many monsters as possible through the window, where their attacks are less effective (demons in particular). The room beyond this window is the first room past the staircase on the way to the computer room.

After you lower the two green columns in the nukage pool, you can make them rise by walking onto one. This allows you to jump to two high platforms at the far corners of the pool, holding a megaarmor and a box of bullets (P). (If you are still on the column when it stops moving, you are not trapped: pressing the button on the east wall lowers both columns again.)

The switch near the blue key opens a hidden door in the small room at the bottom of the nearby staircase, across from the blue door. This provides a shortcut back to the beginning of the level.

The dark room before the exit contains a large horseshoe-shaped wall in the center. The northern-most section of this wall (Q) is a hidden door.

As well as geometry simplification in several rooms, a number of other changes were made to this level compared with the PC version.