MAP05: Phrenetic Chainsaw Slaughter of a Crippled Infant (32in24-5)

MAP05: Phrenetic Chainsaw Slaughter of a Crippled Infant [sic] is the fifth map of 32in24-5, a deathmatch megawad. It was designed by Tango, detailed by Mike Brincka (brinks), and uses the music track "Jungle Battle," originally composed by Kazuki Muraoka for Contra and sequenced to MIDI by Gecko Yamori.

It was the thirty-fifth and final map to be submitted to the project, with Tango posting it in the project's forum thread three minutes after the 24-hour mark had passed. Despite the cheerful title of the map, it does not actually contain any chainsaws. 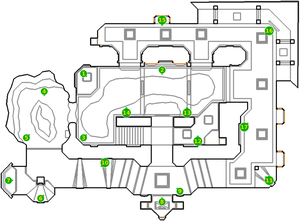 Map of Phrenetic Chainsaw Slaughter of a Crippled Infant 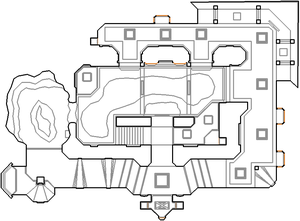 Map of Phrenetic Chainsaw Slaughter of a Crippled Infant

This map features quite a compact layout, with multiple areas despite a small overall map size. The map features a techbase covering the southern, eastern and northern sides, with a small exit in the south-west of the building to a small cave that covers the west side, and an outdoor segment in the centre. A small extension to the building can be accessed from some stairs in the south-west of the outdoor area and running across the gap to a platform holding a green armor. In the south-east corner of this balcony is a small pit with a teleporter that leads to a ledge in the building along the south edge of the map, where the exit switch is located. Another teleporter on the opposite (eastern) side of this ledge connects to the other end of the building, in the north of the map. Although both teleporters are two-way, there is nothing in the pit that the western teleporter connects to, so using it this way is somewhat redundant.

This level contains seventeen spawn points, all of which are placed on top of a super shotgun.