MAP05: Precarious is the fifth map of Sunder. It was designed by Insane_Gazebo and uses the music track "Become the Hunted," originally composed by James Paddock (Jimmy) for Plutonia 2. 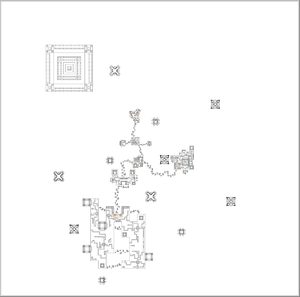 Map of Precarious
Letters in italics refer to marked spots on the map. Sector, thing, and linedef numbers in boldface are secrets which count toward the end-of-level tally.

Do not fall into the lava at any time as there is no way to escape.

The starting platform naturally has a shotgun, green armor, backpack, and ammo. You will need to hop the bricks over lava in order to proceed through this level, but only one path is open at the moment. Take the west path to a small area with a super shotgun, revenants, and cacodemons. Get rid of these enemies and use the skull switch on this platform. Return to the starting point to deal with three pain elementals. Your next destination is south.

Take the bricks leading south (east leads to the exit, but that is blocked off at the moment). Head under the arch and head to the middle, where the small buildings here will open up revealing revenants, Hell knights, and a baron of Hell. Take note of the brick path to the east, but do not go there yet as the way is blocked at the end. Take the west path of bricks, which eventually leads south. Stepping onto the soul sphere brick reveals the walls ahead of you, with Hell knights directly in front, revenants on both sides, and a cyberdemon to the southeast. Quickly head onto the big platform when this happens. A chaingun is behind the Hell knights, a megaarmor is to the west, and a switch is on the nearby platform with revenants. This switch reveals another switch on the opposite platform with revenants, and that switch reveals a switch where the cyberdemon came from. After pressing this last switch, return to the previous large platform, but you will need to be quick to deal with the pain elementals. Since this is an open level, the lost souls that spawn will be exceptionally troublesome.

Your next destination is the eastern path on this large platform, which you ignored earlier. However, the way is clear, so make your way across the bricks to the next large platform. Grab the rocket launcher and prepare to battle the enemies that pour out, including a cyberdemon at the northeast, an arch-vile at the southeast, and revenants and a mancubi in the middle. A soul sphere is in the middle along with a switch. Pressing this switch reveals another one where the arch-vile was, which will reveal another where the cyberdemon was. After you press that, quickly but carefully return to the middle platform to deal with the pain elementals.

The next destination is back at the starting point and further north. When you reach this area, it will initially be empty, but three arch-viles will soon warp in. These arch-viles can use the teleporters they came out of to escape your shots, so be vigilant in shooting them. On this platform, once again, you will have to press three switches. The first is to the northeast, the second to the southeast, and the last to the west. This will open the way to the southernmost section of the map. You will not have to deal with pain elementals on the way there, but make sure you are careful in reaching this area.

Grab the megaarmor and plasma gun and prepare for the final challenge. Walls will lower around you revealing revenants and three cyberdemons, while Hell knights will teleport in. This arena is open and lacks boundaries, so do not fall. Be particularly careful with the bricks over lava if you attempt to cross from one side to the other. Take note of the supplies, including the soul sphere near the bottom, which is tough to get as it is on the bricks. When you can, note that you have four switches to press in order to open up the exit. The first skull switch is at the southeast end, close to where the soul sphere is. The second is at the northwest end, and the third at the northeast end. After pressing the third switch, the switch where the plasma gun is becomes accessible, and as you can see, it will open up the exit. Return all the way back to the starting platform and carefully head east to reach the exit.

* The vertex count without the effect of node building is 9040.