MAP05: Prison, also known as Norwall Prison, is the location of the first mission on which the Strifeguy is sent by Macil. Many troops of the Front are imprisoned here after an earlier botched raid, and Macil needs them freed for the later raid on the Order's castle. It uses the music track "Intro".

As a means of proving himself to Macil, the player is tasked with freeing a group of Front troops who have been imprisoned by the Order and are awaiting execution. In order to accomplish the task, the player must first visit Governor Mourel to acquire a prison pass, but Mourel will only trade favors for favors, requiring the player to complete one of a choice of two tasks first. Once the player has the pass, he enters the prison, but Warden Montag refuses him entry. He kills the warden to get the prison key and then later slays Judge Wolenick, cutting off his hand. The severed hand has the pattern that unlocks several doors and shuts down the force fields around the holding cells. 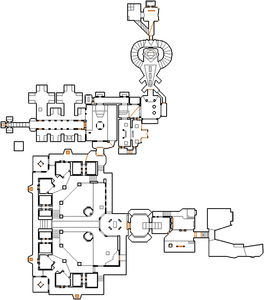 Map of Prison
Letters in italics refer to marked spots on the map. Sector, thing, and linedef numbers in boldface are secrets.

Keep following the passage, killing any acolytes and stalkers that get in the way, until you find your way blocked by bars; flip the switch in the room to the south to open them and continue following the corridor north to another set of bars; flip the switch in the neighboring room to open them. Head west to a lift and step on it to be taken deeper into the prison. Head north through the next room to the doorway, then turn right. At the end of the passage, turn right again to see a door marked "Main Control" which is sealed with a hand scanner. Go past this door through an archway and turn left to pass between two metal pillars. The room ahead has two curved staircases; go up either staircase and open the door at the end to reach Judge Wolenick's chamber.

Talk to Wolenick to learn that only his pattern key can unlock the cells, then kill him and take his severed hand. Backtrack to the "Main Control" door and interact with the hand scanner to get past it. In the next room, use all the hand scanners on the east wall to free the prisoners and open your exit route. Go through the door to the south, then use the hand scanner at the bottom of the stairs to open the next door. Head north to the passage you used earlier and turn left, then left again. Head west around the walkway and use the keyhole next to the west door to open it. Head down the corridor between the now-open cells and go down the stairs at the bottom to the teleporter, which will return you to the Front base.

From Montag's desk, go south to drop into an area with two medical kits on a shelf on the east wall, and three assault rifles standing against the west wall along with bullets. These weapons are useful if you have not already bought a rifle from Irale, but taking them will trigger the alarm.

After taking the lift down to the north area of the prison, go north though the room into a small corridor. Turn left to see a door with a keyhole; press use on the keyhole to open the door, behind which you will find two medical kits and two boxes of bullets (plus a grenade launcher in multiplayer.

In the east side of Wolenick's chamber is a large map screen. Go around the screen to find a door, leading to a room with 50 gold, two piles of mini-missiles, and a pack of poison bolts (or two packs on the Training or Rookie skill levels).

Two ceiling chains (Things 1 and 12) and seven medium torches (Things 4 through 10), all in the same room, have no flags set for any of the three difficulty classes, so they do not actually appear in the level. A deathmatch start (Thing 425) has no skill flags set either, but because of special handling in the engine, it functions normally in the level.