MAP05: Rooftop Rampage is the fifth map of Running Late 2. It was designed by A2Rob and uses the music track "". 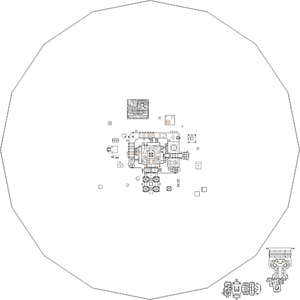 Map of Rooftop Rampage
Letters in italics refer to marked spots on the map. Sector, thing, and linedef numbers in boldface are secrets which count toward the end-of-level tally.

A shotgun guy (thing 1157) is outside of the map on I'm too young to die and Hey, not too rough, preventing 100% kills on these skill levels.

* The vertex count without the effect of node building is 12163.