MAP05: Roundabout is the fifth map of Doom 2 Unleashed. It was designed by Walker Wright (Pavera) and uses the music track "Warfare / Full Stop" from Command & Conquer.

When using the music WAD included with this megawad, this level instead uses the music track "The Oasis" by James Paddock (Jimmy). 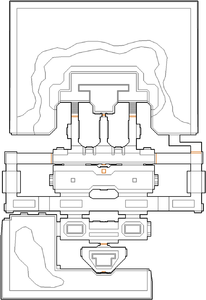 Map of Roundabout
Letters in italics refer to marked spots on the map. Sector, thing, and linedef numbers in boldface are secrets which count toward the end-of-level tally.

Go straight forward and head through the door in front of you, then head forward past a shotgun guy until you reach a skull switch. Press it then turn right and head forward to a tunnel that has opened, killing the approaching demons on the way. Follow the tunnel past some imps and shotgun guys until it turns east (watch out for revenants ahead on Hurt Me Plenty (HMP) skill level or higher), then go through an opening in the wall on your right and turn right to go through a green doorway leading outside. Turn left and then left again, following the path past imps and demons to a blue skull key guarded by two Hell knights, plus a baron of Hell on Ultra-Violence (UV) or Nightmare (NM).

Backtrack through the green doorway and head east until you see a door on your right, between two blue skull textures. Open the door to find a satyr switch being guarded by a monster - a cacodemon on I'm Too Young to Die (ITYTD) and Hey Not Too Rough (HNTR) skill levels, a pain elemental on HMP or a mancubus on UV and NM. Press the satyr switch to finish the level.

Before pressing the skull switch near the start of the level, go north-east or north-west to find passages leading to large silver doors. Open either door and climb the stairs to a raised walkway surrounding the starting area, which you can follow to find a chaingun.

After following the tunnels to the southern half of the level, head north into an area containing a super shotgun sitting on a square step. Watch out for two mancubi that appear when you collect the weapon.

A berserk pack can be found in an arch east of the blue key door.

* The vertex count without the effect of node building is 897.