MAP05: Sinister is the fifth level of Resurgence. It was designed by Josh Sealy (Joshy), and uses the music track "Suspense" by Robert Prince, taken from Doom. This map remains mostly unchanged from its original appearance in Surge. The level sees a change in the visual theme, with this level taking place in a small Gothic-styled fortress, similar in appearance to Quake. 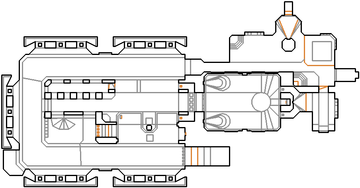 Map of Sinister
Letters in italics refer to marked spots on the map. Sector, thing, and linedef numbers in boldface are secrets which count toward the end-of-level tally.

The start of this level is arguably the most difficult part, especially if playing from a pistol start. Run along the blood river to the first corner and pick up the super shotgun on the left. Use this to clear the monsters around the start area, then pick up the berserk pack to recover any lost health. Go around the first corner and pick up the green armor. Around the second corner, you wll find the chaingun, but here you will also be attacked by sergeants inside the fortress, and also a chaingunner at the end of the river, in addition to monsters on the river. While on this straight, enter the fortress and turn right into the small area where the sergeants were attacking from. Pick up the yellow skull key at the end of it. Leave this area and turn right, then go up the last set of steps on the left and take the red skull key from this area.

Make your way back around the fortress to where you entered initially, but this time go up the steps towards the yellow bar, and open it. Follow the short tunnel and open the red bar. Take the megaarmor and press the switch at the end of this ledge. Drop down into the blood running through the temple, and pass the now lowered bars into the hole. This will bring you into a small room, containing a cyberdemon. Make sure to take the plasma gun behind it, as it will be very helpful in the fight. Watch out for two additional monsters on Hurt Me Plenty and Ultra-Violence, imps on the former, and demons on the latter.

To get out of this area, you will need to press a switch in the narrow section behind the cyberdemon, which opens the bars at the top of the steps. You can do this without killing the cyberdemon, though it is dangerous due to the risk of not being able to dodge any rockets sent towards you because the switch is in a narrow space. Also note that the bars close after a short period, and the switch will need to pressed again to re-open them.

Once you are through the bars, lower the brown platform, and watch out for the revenant standing on it. Also be wary of the chaingunner waiting at the top. Turn left and as you enter the outdoor area, a few monsters will appear in front of you. This area contains the blue skull key. Approaching the blue skull will open an alcove behind it containing an [[arch-vile], though he will quickly teleport to another part of the map. Take the blue skull, then turn around and go down the tunnel to the right, which brings you near to the fortress entrance, and also where the arch-vile ended up. Kill the arch-vile as fast as possible to prevent it resurrecting monsters, then enter the fortress, and take the first set of steps opposite, where you will find the blue bars. Open them, and go up the steps past them. As you reach the top of the steps, another arch-vile will appear in front of you. Kill it, then press the switch at the end of this area. This will open the bars to your right. Go past them and the level will end via a death exit.