MAP05: Storage Sector Eight is the fifth map of Disrepair. It was designed by Andrea Rovenski (Cyberdemon531) and uses the music track "Tallon Overworld (Theme 2)" by Kenji Yamamoto and Kouichi Kyuma (from Metroid Prime). The par time defined in MAPINFO is 50 seconds. 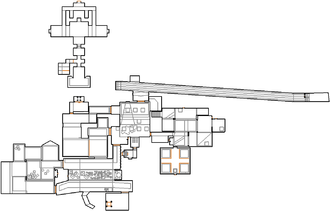 Map of Storage Sector Eight
Letters in italics refer to marked spots on the map. Sector numbers in boldface are secrets which count toward the end-of-level tally.

To raise the sets of colored bars, you need to press the corresponding switches. The yellow key is found by pressing the switch in the small north-western room, and then running up the step raised by it (in the upper walkway in the main room), onto the elevated pillars. The switch is located in the western-most room. The blue key is found on top of crates in the open-aired storage room at the south of the map, with the switch located in the room following on from the teleporter behind the blue door. The red key is found in the same room as the blue switch, with its switch being found beside the step that led to the yellow key. Once the bars are raised, you may exit the level.

It is possible to glide past the three sets of key bars, granting access to the end level switch without requiring any keys.

* The vertex count without the effect of node building is 1441.