MAP05: Tech Center is the fifth map of Doom 64, designed by Tim Heydelaar. This map is quite big and contains lot of enemies if on the "Watch Me Die" difficulty. The level consists of exploring lots of different rooms and computer stations in order to find switches and keys. It uses the music track "Hellistatic". 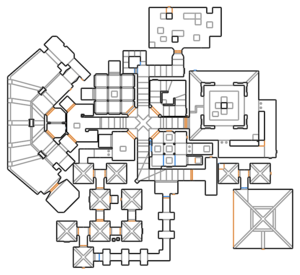 Map of Tech Center
Letters in italics refer to marked spots on the map. Sector and Thing numbers in boldface are secrets which count toward the end-of-level tally.

Follow the corridor with the megaarmor down, through some spectres, into a storage room with crates and lost souls. Follow the wall to your left behind some crates, lower an obstructed one and press the switch it reveals to get the shells in the corner. Now you can also jump across the other crates to pick up more ammo and a chainsaw.

Now take the opposite staircase with the lamp in the corner. Find a chaingun and some ammo in the T end room with nightmare imps. Press the switch to open a door in a third stairway opposite the blue door. You see three barrels in a yellow room. Two Hell knights hide behind the side walls of the entrance, a third in a hidden niche to the right which you can open and find boxes of bullets inside. The left wall leads to an outdoor area with spectres, Hell knights and lost souls. Follow it around, use the lift up to some nightmare imps, and press the switch in one of the central rooms with more imps. Run down into the niche to grab a shotgun. A room to the left contains another Hell knight and zombies.

Looking towards the blue door, the wall to the right of the corridor is a yellow door, the wall to the left leads down to the yellow key, guarded by Hell knights. Get the key and open the yellow door. Get on the platform and press the switch where the Hell knight stood, using the right part as lift. The area with the caged supercharge looks possibly slightly familiar from another DOOM level.

Go into the area opposite from the one where the yellow key was found, the bars have disappeared now. A room with a nightmare imp has a door to a junction. First take the opposite room, then follow the short corridor to the next. The niche opposite to the computer screen contains a berserk pack. On to the next room with a zombie and Hell knight. Take the armor bonuses and continue to the right until you find a switch to press. Back to the room to the left and find another switch. This opens a hallway from the right room with several zombies as well as crushing ceilings. You will end in a kind of display room above a staircase - defeat the Hell knight as well as some cacodemons, then turn right and press the switch. Now you can get the red key in the yellow door room.

A niche in the previous starting room has opened and reveals some lost souls. There are some too in the room behind the red door, with a nightmare imp. The blue key is under a crushing ceiling but can be grabbed with good timing through a broken fence - which opens niches with more lost souls. Finally, the blue door. A few imps are everything waiting here? Press the switch to the left, which makes a teleporter in the opposite corner available. You land in a room with rockets, the opposite room across the junction has a Hell knight and a switch to open the third room with cacodemons, a rocket launcher and even more rockets - and the switch to open the exit area, guarded by Hell knights.

* The vertex count without the effect of node building is 1402.