MAP05: Temple of DOOM LOL is the fifth map of Mock 2: The Speed of Stupid. It was designed by Schepe and uses the music track "Tom's Ripoff of Mario3" by Tom White (Hyena). 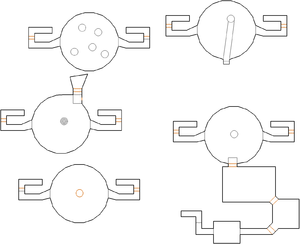 Map of Temple of DOOM LOL
Letters in italics refer to marked spots on the map. Sector, thing, and linedef numbers in boldface are secrets which count toward the end-of-level tally.

The fourth room contains a cyberdemon. In the middle of the room, an invulnerability powerup can be found. Defeat the cyberdemon and then jump over another invisible wall in the hall to be teleported to the fifth and final room. It composes of several barons of Hell, three Hell knights and a single arch-vile. Dispatch them. Walk into the hole seen in the middle of the room to exit the level.

A BFG9000 can be retrieved via a blue key that can be found via the fourth room. Go inside the room seen to the left of the room, which contains a plethora of SS Nazis. This room also contains several rocket launchers. Dispatch the enemies. The next room, seen in the southeast corner of the room, contains mancubi. Kill them. The next room contains the blue key required to get the BFG. Walk over a Plutonia-esque invisible bridge to get the key in the alcove. Go all the way back to the third room, take the lift seen in the northeast corner of the room, and open the door with the blue key to retrieve the BFG.