MAP05: That Flooded Place is the fifth level of Plutonia: Revisited Community Project. It was designed by Keeper of Jericho and uses the music track "Dark Halls," composed by Robert Prince for Doom. The par time defined in MAPINFO is 1:30. 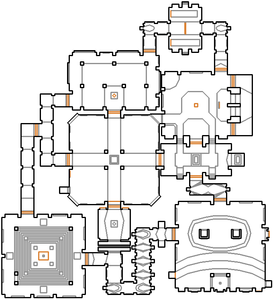 Map of That Flooded Place
Letters in italics refer to marked spots on the map. Sector, thing, and linedef numbers in boldface are secrets which count toward the end-of-level tally.

In Vanilla Doom, the visplane overflow can occur in the yellow key area.

* The vertex count without the effect of node building is 1775.

This level is based off Congo and Well of Souls, the first two levels of The Plutonia Experiment. It was constructed in a "couple of weeks," using Doom Builder.