MAP05: The Canyon is the fifth map of Requiem. It was designed by Bill McClendon, and uses the music track "Mystic's Glance" by David "Tolwyn" Shaw.

It just doesn't seem to be getting any easier, does it...?
NOW it appears the mutant hellspawn have located and utterly corrupted the waste-processing plant in an outlying area. The only reason you can think of for them to do this is the ample room they have in the canyon... but that area is sealed...
...isn't it? 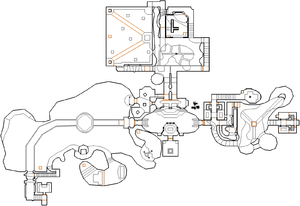 Map of The Canyon
Letters in italics refer to marked spots on the map. Sector numbers in boldface are secrets which count toward the end-of-level tally.

Grab the shotguns at the start and head into the main field. The area across from you has two lifts going downward and a door to the left. Go through the door if you want a super shotgun, but otherwise, take the right lift first. Take this path through a door and follow this path until you find a door at the northern bend. Enter this door and press the switch at the far end of this room. This opens up a hall on the path with the left lift, so now you need to go all the way back to the nexus with two lifts and then take the left one. Take this path down to a large nukage-filled room, with either a lot of lost souls or some pain elementals in the nukage depending on your difficulty level. On the small catwalk that you are on, head left and find the switch on the back side of the column to raise two bridges. When they rise up, cross over to the northwestern part of the room. Here, hit the switch on the back side of this column, then quickly run to the right, as there is a lift here with a demon that rises up eventually. At the top, go through the hall until you find the blue keycard, then return across the wooden beam back to the lifts.

There will probably be a few monsters here, so get rid of them and take the blue door to the east. You will see a blood trail on the floor at an intersection. Go north at the intersection, getting rid of the Hell knight. There will be two doors on the sides, each containing a Hell knight and a passage to two side rooms. Both of them have switches on the southern sides of the computer panels. You need to flip both of them. Once you do that, go back to the intersection, and go either south or east all the way to a red section. If you had pressed both switches earlier, a hall to the east will be open. Head through this hall, to find two side walls that act as doors. Take the right door, and kill the zombieman and Hell knight inside. The red keycard is in this small room. Press the eye switch on the opposite side to take it, then get out of here. You can use the other skin wall if you wish, to teleport to an area with supplies overlooking the red area. Otherwise go back to the main field.

Again, there might be some monsters back here, so kill them and proceed straight across to the red door. From here, you will be in the canyon, so head across the bridge. Some monsters may teleport into the center, so look out for them. You will find a marble hall with Hell knights and barons of Hell at the end of the bridge. Go through this hall killing the monsters and the exit will be right there.

The deathmatch portion of this level does not contain an exit, preventing you from leaving the level in multiplayer gameplay unless a timer has been set through the -timer switch. The Deathmatch Repair File created by Steve Terry adds an exit to this area located in the southwest.

The floors of sectors 52 and 85 are covered with an animated teleporter texture, even though they are at the same height as the brown sludge pool nearby them, and the sectors do not conform to the fixed grid that flats are aligned on. It is possible that this level was designed before the animated teleporter texture was added to the wad, using the start and end of the alternate brown slime animation (SLIME05 and SLIME08) as bookends, and no one on the development team remembered that the alternate brown slime animation was already used in a map. 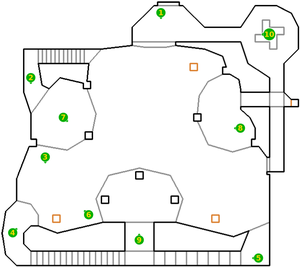 * The vertex count without the effect of node building is 2174.