MAP05: The Forgotten Prison is the fifth map of Community Chest. It was designed by Black Void. 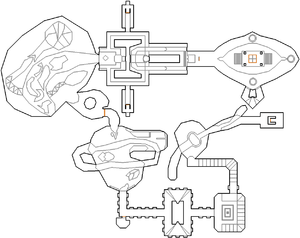 Map of The Forgotten Prison
Letters in italics refer to marked spots on the map. Sector numbers in boldface are secrets which count toward the end-of-level tally.

Enter the cavern to the east. Go into the tunnels at the north and south, and flip the switches in each one. Go to the east, jump to the lower floor, run up the stairs, and step on the demonic face panel. An alcove will open to the south; go in, and take the red key. Take the lift back up, and return to the start of the level. Head down to the lower cavern, and open the red door. Dash south through the grassy area, and head through the hallway to the east. Go up the staircase, and then enter the northeast passageway. At the end of the passage, go to the east of the pillar, and hit the switch.

* The vertex count without the effect of node building is 1058.