(Redirected from MAP05: The Waste Tunnels)

MAP05: The Waste Tunnels is the fifth map of Doom II. It was designed by American McGee and uses the music track "DOOM". The par time is 1:30. If the game is played on Ultra-Violence or Nightmare! skill levels, the monster Hell knight debuts in the map. Otherwise it will only debut on MAP06: The Crusher. 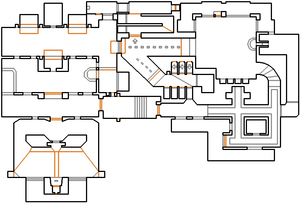 Map of The Waste Tunnels
Letters in italics refer to marked spots on the map. Sector, thing, and linedef numbers in boldface are secrets which count toward the end-of-level tally.

The opening conditions of the level are dependent on the chosen skill level. On the two easiest ones, there is a shotgun at the gate in front of you. However, on the three hardest levels, a soul sphere can be seen in the distance, and the shotgun is replaced by a super shotgun.

Walk straight ahead at the start to enter a corridor. Beware the monsters that guard the area. Stay away from the walls, as there are several sinking platforms that can lead you to surprise encounters with imps that reside in small chambers below the floor. Head east towards the door at the end of the room. When you are at it, you will find out that the floor in front of it is a concealed platform as well. At this point, you are faced with a dark corridor with a three-way fork.

You have two alternative routes to the red keycard. The center path in the fork is the faster one. At the end of the path, there is a lift leading to a brick-floored hall. Go through the door on the northern side of the hall to get behind the barred area. Follow the corridor around to the east to reach the red keycard. Continue down the passage and drop into a network of water tunnels.

Go through the red door that is straight ahead. On Ultra-Violence or higher, you will face the first Hell knight of the game. After defeating him, pick up the blue keycard, proceed through a second red door, and enter the adjacent blue door.

Behind the door, continue west or east around the wall. Then proceed along the edge to the yellow keycard. Upon picking it up, two walls will open up, revealing cacodemons. After dealing with them, you can go along the bridge and enter the yellow door to exit the level.

In the starting corridor with the sinking platforms, the northwestern imp chamber holds a security armor. If you like to visit the place, move towards the wall between the two red torches using small movements. Such action will make the platform lower without you and expose the imps for you to kill. Get the armor and use the platform to return.

The northern path of the fork has a door and a blinking arrow pointing at it. Behind the door, there is a winding hallway with a soul sphere at its end. Notice that when you are at a hairpin turn, a room with a monster will be revealed in the direction you came from.

The southern path leads to a short hall with a series of doors. As you enter the new area, a door will close behind you, trapping you in temporarily unless you retreat rapidly. (Note that if you end up onto the side you came from, you can reopen the door by returning to the platform at the fork.) Each of the northern doors covers a room with a switch. The arrows on the floor indicate what the toggles will do.

A certain section forms a rectangle in the water tunnels. The space in the middle can be accessed from the southern side. There is a room with a rocket launcher guarded by a group of zombiemen. If you yet enter the door to the west, you can get into the dry corridor behind the barred windows. The place holds a box of shells. On the three easiest skill levels, there is also a varying amount of medikits.

On Ultra-Violence or higher, two lost souls (things 107 and 108) occupy the same position and are immobile until one of them is killed.

If the player opens the westernmost door (sector 46) in the short hall with the series of doors while using no monsters mode, the ceilings of the combat armor chamber (4) and the alcoves to either side of the exit (153) will lower all the way to the floors, preventing the entrances into the rooms from ever opening.[1] Due to an unknown reason, the two mentioned areas share tag number 9 with the westernmost door. They are thus activated as well when the door is opened, and since the ceiling heights of their adjacent sectors (the closed doors) are at the same level as their floors, the ceilings will actually move four units past the floors. During normal gameplay, it does not cause problems as the present monsters prevent the movement.

The backsides of linedefs 489 and 560 are missing upper textures, resulting in both having a hall of mirrors effect.

The official French name of this level is Les Égouts.