MAP05: Time Gate is the fifth level of Eternal Doom and was designed by Sverre Kvernmo. After teleporting out of the sewers you emerge topside in the coolant for the time gate. Once it is up and running, you finish the level (should you choose the right gate) by entering a gate and you are transported 1250 years into the past... 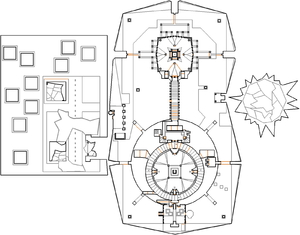 Map of Time Gate
Letters in italics refer to marked spots on the map. Sector, thing, and linedef numbers in boldface are secrets which count toward the end-of-level tally.

Go along through the coolant until you reach an elevator. Watch out for a few mancubi on the walls. Ride the elevator up. Note the location of the "Red lock engaged" and "Blue lock engaged" panels as you pass them. They will unlock the doors inside. Walk around the main structure until you reach the rear, you don't need to go inside just yet. The rear is where you can see the time gate (and an invincibility sphere) inside.

There is a skull switch on the back wall of the structure. Hit that to make the yellow key appear somewhere inside. Go back the way you came and then head inside the structure through a door in the pillars connecting the two sides. Note the yellow key door across from you. Go right, to the side opposite the time gate (the locked blue key door). Watch out for a mancubus down there. There are flashing strips of lights on the floor. Next to a computer console there is a yellow skull marking where the yellow key has now appeared. It is next to the entrance to the power source of the time gate, a locked red key door (activated by a switch, not the key). Now it's time to open that door, and you need to get the red key.

Go back into the pillar part, and then use the yellow key to open the door on the other side of the pillars and simply pick up the red key sitting right outside. Watch out for cacodemons. Now you need to disengage the lock on the red door.

Head back through the doors and around to the front of the structure (where you first come out of the water). There are two panels which read "Red/blue lock engaged." Hit the red one to disengage the lock on the red door.

Head back and open the red key door, which is now unlocked. Inside is a circular staircase with the flashing blue lights and a closed door ahead of you. Descend to the bottom of the stairs. There's going to be two Hell knights appearing. Hit the red switch to reveal a skull switch right next to it. Hitting the skull switch opens the closed door up top. Head back upstairs and enter the room. There are three locks you need to activate, lock 1 should have a red switch on it. Activate the switch to open the door. Don't hit the lever switch across from you just yet. Head inside the compartment and turn around. There is another switch on the inner side of the door. Hit this switch (even if you are unable to see it) and the square in the center will descend, revealing some shotgun guys. Do the same for lock 2 (chaingun guys), and lock 3. Then hit the lever switches--you might try waiting four seconds in between them like the sign says on the entrance. Anyway, eventually the pillar in the middle will open up. Inside the pillar is the blue key. You have now activated the time gate's power source. The door exiting the place is locked though, so head back down stairs and you'll find another red switch has appeared. Hit it and the skull switch that is uncovered next to it. Be quick as there's going to be a revenant in an alcove behind you! Also a lot of Imps will appear on the stairs. Kill them all. The door upstairs is now open again. Now you need to access the time gate.

Head back outside to the panels where you disengaged the red lock. Disengage the blue lock and be sure to take note of the pictures next to the locks. This will make some shotgun guys appear in the room and a chaingun guy appear right around the corner of the stairs, so look out as you're leaving.

Enter the structure and open the blue key door. This is the time gate. Pick up one of the four soul spheres and head around back to get the invincibility sphere (if you're playing UV there is no invincibility) and get ready for a fight. Go back around front of the gates and hit the skull switch on the pillar. Each switch will open up another switch on another pillar. At some point while you're doing this, two arch-viles and a baron of Hell will appear. Kill them, obviously. When they're dead pick up the rockets and another soul sphere if you need it. Enter the time gate to complete the level--just make sure you enter the right gate (you want one that said -1250 years on the pictures next to the locks)!

* The vertex count without the effect of node building is 2442.

There are four time gates at the end with two having an identical destination that cause the level to exit. One of these exits originally had other intended behavior:

"...there was a third "wrong gate" initially but I eventually had to axe it. What the third gate did was time-warp you one hour back in time (the Timegate control-panel texture reflected this at the time), basically restarting the Timegate level. However, because of the archaic ways the Doom-effects work (I used a secret level exit on a level where it wasn't supposed to be used) there was no way to ensure this would always be the outcome. Only if you played the level without saving at all would this effect be ensured (and since I rarely saved my game while playtesting my levels it took me a while to figure out that it didn't work right.)"
― Sverre Kvernmo[2]