MAP05: Toxic Throwdown is the fifth map of 2048 Unleashed. It was designed by Dreadopp and uses the music track "Borealis" by James Paddock (Jimmy). 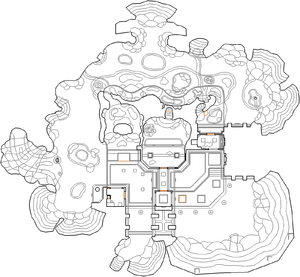 Map of Toxic Throwdown
Letters in italics refer to marked spots on the map. Sector, thing, and linedef numbers in boldface are secrets which count toward the end-of-level tally.

Take the chaingun and open the door ahead to confront three zombiemen, then turn left to see a grassy area with some more zombiemen. Go through the door ahead and to your left to confront a Hell knight, then flip the switch in the north-west corner of the room to raise a lift visible through a window. Go outside and press on the lift to lower it (which will also cause some imps and shotgun guys to teleport in) then ride the lift up and head forward into a cave containing several imps. Head north and follow the path past some cacodemons, imps and a revenant until you reach a door guarded by a knight and two demons. Open the door to find a super shotgun and flip the switch next to the window, ready to kill a revenant guarding an armor that is revealed to your right.

Head back along the path to the lift, passing some imps that have teleported in, then drop down and head east to another grassy area where some cacodemons and two mancubi have appeared. Head down some steps to a water pool and follow it round to find the red keycard sitting on a step, then go back to the starting door to confront two imps and two revenants that have teleported in. Opposite the starting door is a tan door which requires the red key to open - go through it to face four imps, two knights and a baron of Hell ahead, then enter the tunnel they were protecting to finish the level.

* The vertex count without the effect of node building is 5385.