MAP05: Underground Hell is the fifth map of The Twilight Zone. It was designed by Paul Corfiatis and uses the music track " ". The par time defined in MAPINFO is 3:50. 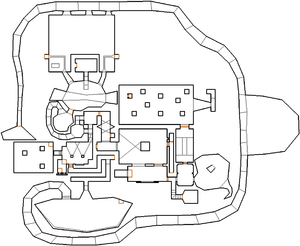 Map of Underground Hell
Letters in italics refer to marked spots on the map. Sector numbers in boldface are secrets which count toward the end-of-level tally.

This is a puzzly level for beginners, which requires a lot of switch pressing and walking over lines. This is inspired by George "King REoL" Fiffy's wads.

A - You start in a wooden room, and your mission is to find the red key to open the exit door on the eastern end of the starting room. A locked door E2 is on the western side of the room. Open the BIGDOOR6 and grab the chainsaw A1, a door in front of you opens.

B - Once you've chainsawed the imps, head eastwards to a new passageway where door B2 is revealed. Go to the top of the staircase and walk over the top step B1 to open door B2.

C and D - Go through B2 and press the switch C1 at the northern end of the room to open door C2. Inside is a cave with a mancubus, end his life and find and press another switch D1, this opens D2 which is in the same place as C1.

E and F - Go inside the new room and you actually walk over line E1, once that happens the door (E2) in the eastern side in the starting room opens. Go there and press a switch (F1) to raise bridge F2.

G - Cross bridge F2 and head into an outdoor area of mossy walls and blood. Switch G1 opens a hidden door G2 located in between switch F1 and door E2 in the eastern side of the starting room. Continue to progress until you reach a hellish and hot lava cave.

H and I - Once you reach the lava cave, a staircase heads down into a very hot lava room. In the western side of the room is a switch H1 which opens H1 door in the lava cave. It is important to SAVE YOUR GAME because if you fall off the tightrope, there is no escape. So anyway, walk the tightrope and press the switch H2 and H2 door. This raises sector H3, another tightrope leading to switch I1. There are three spectres in the pit below waiting to feast on you if you fall off the tightrope. To kill them you must fire rockets against the walls as the splash damage will kill them helping you to 100% kills. Switch I1 opens a hidden door I2 and to get to it, go back and you will find it has opened taking you to a small tech base.

J - Once you pass the techbase you reach an outdoor area, press the switch J1 to open the door J2. This takes you to a very long spiral staircase of darkness where the red key is located. To get back to the start you must go all the way back since there are no teleporters. You should be able to exit the level, your mission is finally complete!

Warning - All liquids except for water can damage the player, so be extra careful.