MAP05 is the fifth map of 2 Sectors. It was designed by MrGuyTodd. 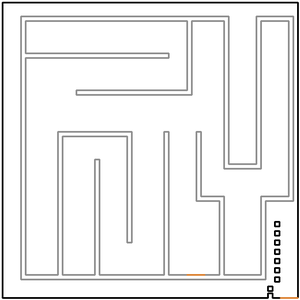 This level is a small maze. Kill the imps and zombieman in front of you then turn left at the junction ahead. Head forward a few steps then turn left and left again to see a mancubus guarding a skull switch, which will lower the maze walls to reveal a variety of enemies including demons, shotgun guys, cacodemons and one or more Hell knights (or two barons of Hell on Ultra-Violence and Nightmare skill level). Kill or lure out the cacodemons behind the columns in the south-east corner, then press the skull switch they were guarding to finish the level.

A shotgun can be found in the north-east corner of the maze. On I'm Too Young To Die and Hey Not Too Rough skill levels, it will be a super shotgun instead.

* The vertex count without the effect of node building is 107.