MAP05 is the fifth level of Brotherhood of Ruin. It was designed by Kristian Aro and uses the E1M3 theme from Heretic by Kevin Schilder. 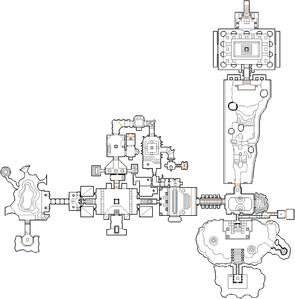 There is a super shotgun behind you and to your left, so get it in preparation of the enemies in the courtyard in front of you. Your only option here is to go east at the moment. Be careful of monster traps as you do. In the room with two arachnotrons, head south into a large rocky area. To raise the stairs for the next temple, there is a switch on the wall behind where you enter, guarded by a baron of Hell. Inside the temple here, go out to get the red skull key. Now go north and go through the red door, which is marked by burning fire on the sides, into a valley. Go all the way through it into an arena with caged monsters on the ledges. The switch here releases demons around you. Kill them, then head all the way back to the hub that was at the starting point. The western passage should be open, go through it to an outside area with water. Cross the water going northwest to a dead-end with two Hell knights and one baron. The switch here opens the door going south. The teleporter here takes you back to the arena, but now you are on the upper ledges. The exit is over here but it is not accessible at the moment, so go through the hall to the next teleporter. In the next area, flip the switch at the end, and watch out for the two close-range chaingunners as you hit the switch in their closet to open the door. A soul sphere rests here, and to get it, take the passage on your right and down to a switch. Press it and the soul sphere will be accessible along with the northern door. Grabbing the sphere triggers an ambush around you though. Keep going down the linear path pressing switches and being wary of traps as you do. When you reach a small room with a Hell knight and a switch, press the switch. This switch opens the bars to the exit. Go south taking the lift and you will end up in the hub again. Take the western path again taking the teleporter to the edge of the arena and then exit.

* The vertex count without the effect of node building is 4630.